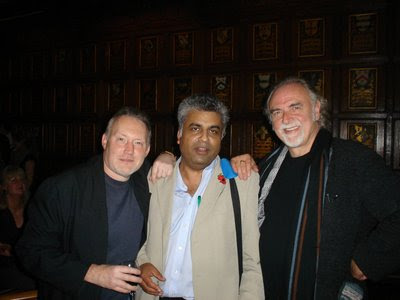 The momentum for 2010 World Horror Convention is building. Back in the UK, Steve Jones advises.

Right [Steve Jones with Peter Crowther supporting Ali Karim who was a little worse for wear...]

Those confirmed Attending Members of World Horror Convention 2010 who are interested in doing a Reading event can now register at the official website (under "Programming"). Having first introduced the popular Reading Café at the 2007 convention in Toronto, Canada, we are delighted to announce that we will be reviving the format in Brighton, once again hosted by Martel Sardina. Designed to complement our regular Programming Schedule, the Reading Café will promote individual readings, multi-author presentations, and small-press book debuts. There will also be time in the schedule set aside exclusively for poets to present their work. Our goal is to capitalise upon the incredible breadth and scope of talentthat regularly attends World Horror Convention. If you wish to read from your work, and you have already joined the convention, then simply go to the website http://www.whc2010.org/ - and click ont he link at the bottom of the appropriate page. Remember to include your name, credits, contact information and any other details that you think maybe pertinent. In the next couple of weeks we will start announcing our exciting line-up of Guests of Honour.

Celebrating its 20th Anniversary, The World Horror Convention will be heldover March 25-28, 2010, in the historic Victorian seaside city of Brighton , on the picturesque south coast of England. This is the first time that the event will have been held off the North American continent.

The theme is "Brighton Shock! - A Celebration of the European Horror Tradition from Victorian Times to the Present Day", and the convention will host numerous panels, talks, presentations, readings, workshops and displays devoted to horror, macabre, mystery and thriller fiction and art in all its varied and fearsome forms.The venue will be the historic Royal Albion Hotel, which dates back more than 180 years and is situated directly opposite Brighton's iconic Palace Pier and a stone's throw from the beach. There are plenty of alternative hotels and Bed & Breakfasts in the immediate surroundings, catering for allbudgets, and Brighton is filled with restaurants, wine bars and clubs. Antiquarian shopping precinct The Lanes, the Sea Life Centre and theworld-famous Royal Pavilion are also within easy walking distance.

Brighton has direct transport links from Gatwick International Airport and the centre of London, and is easily accessible for overseas visitors, especially those from mainland Europe. And if you want to extend your stay, then Britain's annual National Science Fiction Convention, Odyssey 2010, isbeing organised near to Heathrow airport the following weekend. Come for World Horror and stay for Eastercon! The World Horror Convention's prestigious Grand Master Award will also be presented at a sit-down Banquet during the weekend. Past recipients have included Stephen King, Dean R. Koontz, Anne Rice, Ray Bradbury, CliveB arker, Peter Straub, Brian Lumley and Ramsey Campbell.

All information about the convention, hotel and location is available onour website - http://www.whc2010.org/, including an easy to use PayPal Registration Form (which will automatically convert your payment at the current exchange rate).

Or you can print off the form and send it with a cheque (sterlingonly) to: World Horror Convention, PO Box 64317, London NW6 9LL, England.With numerous writers, artists, editors, publishers and booksellers expected to attend from all over the world, this is the one event that the dedicated horror fan, professional, collector or dealer cannot afford tomiss!

I will be registering shortly - so see your there!
Posted by Ali Karim at 12:32 PM