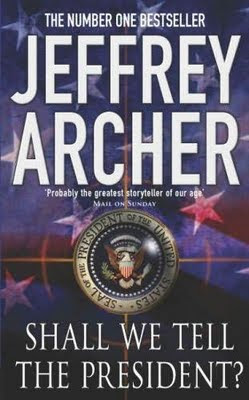 I have been interested in how The Curzon Group have been fairing, especially as their ‘manifesto’ has gained a little slice of blogo-war with thriller writer Steve Mosby. There seems to have been a truce declared since the recent heated debate, of which one point of contention has been the involvement of Jeffrey Archer as The Curzon Group patron. Whatever one considers vis-à-vis the merit of Archer as their patron, he certainly is a controversial character – being an ex-convict, bestselling writer and peer of the realm.

It seems that life often mirrors art, as the continual rollercoaster ride of Jeffrey Archer’s fortunes mirror that of his own characters – for The Times reports today that Archer is back in the money –

JEFFREY ARCHER is being paid a record £18m advance to write a Forsyte Saga-style epic spanning a century in the lives of a fictional family from Bristol. The deal is believed to be the biggest signed by a British author so far and requires the peer to produce five novels over five years. The first book is due to be published in 2011.

Archer said that he will begin work on The Clifton Chronicles shortly. The novels will set out the trials and tribulations of a character called Harry Clifton who rises from humble beginnings to become a wealthy tycoon.

Born to impoverished parents in 1920, Clifton wins a place at grammar school where he becomes involved with an affluent shipping family called the Davenports

The deal with Macmillan will see one book published every May until 2015, by which time Archer will be 75.

Only a handful of American authors, including Michael Crichton, who died earlier this year, Dan Brown, James Patterson and Stephen King, are thought to have received larger advances than Archer.

In Britain he can be challenged only by J K Rowling, whose contract to write the Harry Potter novels for Bloomsbury has been shrouded in secrecy. She received just £2,500 for the first book in the series. Although Rowling received much higher advances for subsequent Harry Potter books, much of her £499m fortune is derived from royalties and the success of the spin-off films.

The largest advances recently have gone to celebrities writing their memoirs. They include Peter Kay (£2m), Julie Walters (£1.5m) and Ant and Dec (£2m between them). But sales of these showbiz books have been falling away.
Since his first book, Not a Penny More, Not a Penny Less, was published in 1976, Archer, a former deputy chairman of the Conservative party who was jailed for perjury, has made about £100m from his literary career.

So it seems that The Curzon Group’s patron is back in the Money; so let’s see if Archer's new saga is readable.
Posted by Ali Karim at 6:29 AM