Calling time on our Libraries 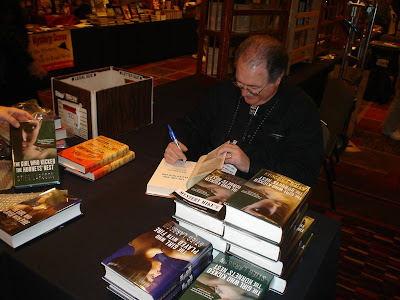 In these times of austerity I am saddened to hear that another blow to literacy is coming, and approaching fast. The library system in the UK is under threat [like in many other countries] as reported today in The Bookseller –

Library campaigner Tim Coates has warned between 600 and 1,000 libraries could close over the next 18 months amid a media blitz on last week's declining library visit numbers.Last week The Bookseller reported figures from the Department of Culture Media and Sport that revealed the proportion of adults visiting a library decreased from 48.2% in 2005/06 to 39.4% in 2009/10.The story has been picked up by the mainstream press over the past 24 hours with them also reporting on Ed Vaizey's library support initiative, which proposes cutting costs by giving libraries to communities to run amid other measures.

This is very sad, in these days of anxiety the need for a refugee [such as only a library can provide] for enquiring minds – has never been so important.

Ten submissions have been chosen from proposals put forward by local authorities.

"A strong library service, based around the needs of local people, can play a key role in our ambitions to build the Big Society by providing safe and inclusive spaces for people to read, learn and access a range of community services," Mr Vaizey said.

He said he wants people to think "imaginatively about where libraries could be" as there are a number of closures being threatened across the UK.
A pub in the Yorkshire Dales is currently being used as a library after the villagers of Hudswell bought it to save it from closing.

The books are from North Yorkshire County Council but the lending is run by the volunteers.

Other suggestions that are about to be trialled in parts of the country are to have library services in supermarkets, shops or run by volunteers.
In Doncaster three libraries have been earmarked for closure and five are under threat in Lewisham.

The whole library closure issue is close to my heart, as my memory reminds me of the little boy who sought refuge and enlightenment in the 1960’s and 1970’s sitting in the library, and having the same access to knowledge as the kids from wealthy families. I recall my parents being bemused by my weekly trips to the library [returning with carrier bags filled with knowledge, and enlightenment about the confusing and dangerous world that surrounded me]. My library card was my access point to the world, and at that time my most treasured possession.

Technology may well be at play here; as the attention spans in our children becomes eroded, and the Soundbite and Facebook updates dominates the extent of their curiosity. The term ‘use it or lose it’ comes to mind, and it looks as if we’re losing it.