No Longer a Secret 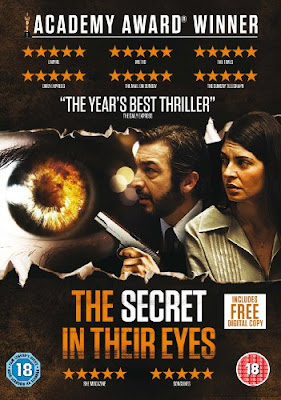 The more books you read, the more films you watch, the harder it is to discover something really fresh, new and exciting. It’s been a while since a film really ‘blew my socks off’, or made me ‘think deeply’. Last night I had the privilege to sit transfixed watching a film that had me hypnotized, paralyzed and made the synapses in my brain spark away like microscopic welding torches. Most importantly it made me think about life and existence, and when the credits rolled - I sat in silence, contemplating the significance of what I had just seen.

Just released on DVD in the UK, this film beat Jacques Audiard’s French prison drama ‘A Prophet’ [Un prophète] for last years Best Foreign Film Oscar. The film I am talking about is of course Juan José Campanella 2009 Argentine crime thriller ‘The Secret in Their Eyes’ (El secreto de sus ojos) based on Eduardo Sacheri's novel La Pregunta de Sus Ojos (The Question in Their Eyes).

I can not recommend this film highly enough, as it is deeply disturbing, moving, complex, multi-layered and existential in themes, which include how can we live a life when there are passions / deeds unfulfilled? And what price do we pay for these deeds done, and those not done, and what exactly is price of fixing these unfulfilled passions and deeds. As worthy as all this sounds, ‘The Secrets in Their Eyes’ is a film that makes you question your own life; and look at the ‘nodes’ and ‘junctions’ that it contains. When we reflect over our lives, we often find times and situations that defined who we are. The film allows reflection upon the randomness of existence [as well as the cruelty of circumstance] without slipping into the arms of madness. I really don’t want to say anymore as the plot has so many twists and revelations, it is a delight to see the narrative unfold toward a jaw-dropping climax[s].

If you like your films cerebral, existentialist in theme and that stay embedded in your mind like slivers of jagged glass, then watch ‘The Secrets in Their Eyes’, [even if you dislike reading subtitles].

And here’s word from the British Critics

Philip French in The Observer -

There is usually, and often with justification, serious criticism of the movie voted by the American Film Academy to receive its Oscar for best film in a foreign language. It happened again this year when the international critics' anointed contenders – Michael Haneke's The White Ribbon and Jacques Audiard's A Prophet – were ignored in favour of Juan José Campanella's The Secret in Their Eyes. Well, Haneke's picture is certainly more original and Audiard's altogether harsher, but Campanella's Argentinian thriller is a film of subtlety, distinction and depth that in most other years would have made it appear a very worthy recipient. Moreover, it seems an apt choice to mark what Sight & Sound celebrates on the front page of its September edition as "The Rise and Rise of Latin American Cinema" over the past decade.

The film's subject is the obsessive pursuit of a brutal murder long after its significance has faded into the past, a theme familiar from movies as different as Anatole Litvak's The Night of the Generals and Sean Penn's The Pledge, both based on bestselling European novels. In this instance, the crime is the rape and murder of a pretty schoolteacher recently married to a young bank clerk in Argentina in 1974 when the country was on the brink of its dirty war and dictatorship.

Geoffrey Macnab in The Independent –

Admirers of Michael Haneke's masterpiece The White Ribbon are likely to hold a small grudge against Juan José Campanella's The Secret in Their Eyes.
After all, Campanella denied Haneke the Academy Award for Best Foreign Language Film earlier this year. A few months on, that still seems a very perverse decision. However, film-making isn't a competitive sport. The Secret in Their Eyes is a fine film in its own right and deserves to be regarded as more than just the movie that spoiled Haneke's Oscar night.

The appeal of The Secret in Their Eyes lies in its lithe and mysterious quality. It deliberately blurs genre lines and storytelling styles. This is a murder mystery. It is also a love story, a drama about memory and bad faith and even, in an oblique way, a political allegory about 1970s Argentina. Adapted from the novel by Eduardo Sacheri, the film is primarily set in 1974 Buenos Aires, but with flashforwards to the present day and flashbacks.

Peter Bradshaw in The Guardian –

At this year's Oscar ceremony, film critics congratulated themselves generously for having praised the triumphant Iraq drama The Hurt Locker, thus justifying our continued existence in the face of a million bloggers. Then we compounded the conceit by grumbling that the best foreign picture prize had not gone to either of the press favourites – Michael Haneke's The White Ribbon or Jacques Audiard's A Prophet – but to Juan José Campanella's little-known Argentinian noir thriller El Secreto de Sus Ojos, or The Secret in Their Eyes. I am ashamed to recall that I, too, joined in with the general air of dismissive bemusement, without having yet seen the film, an omission now rectified.

The Secret in Her Eyes isn't, in fact, as good as either The White Ribbon or A Prophet, but it is a supremely watchable, well-made and well-acted movie with a dark, sinewy sense of history: a tremendously slick thriller from a director who has worked on American TV shows such as Law and Order and House. His movie may in fact be rather closer to boxset-quality television drama than cinema. But respect has to be paid right away to Campanella's most delirious big-screen flourish: an unbroken travelling shot that begins soaring over a football stadium during an evening match, swooping down into the stands where a suspected felon is being sought, tensely following him into the lavatories and then out on to the field itself, bringing play to a halt. It looks like a mix of CGI and a colossal real-world crowd scene, with the join cleverly concealed.

I would state for the record, ‘The Secret In Their Eyes’ to join my personal list of top crime thrillers, because it is wonderful, but a warning – like does open with a very disturbing crime.
Posted by Ali Karim at 4:19 AM