Busking on the streets of Cleveland

I had a really great time at Bouchercon 2012 [‘The World Crime, Mystery and Thriller Convention’], held this year in , the home of The Rock and Roll Hall of Fame. This year I travelled with my very dear friend, Editor-in-Chief of Shots eZine and award-winning novelist Mike Stotter. My friend, Editor at The Rap Sheet, Jeff Peirce posted a few photos of our adventures here 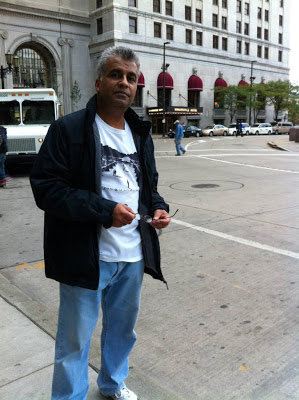 On the Friday afternoon, in the rain, we passed a bar, and this song was blaring out on the street, and it got my feet tapping. I am ashamed to say I had never heard this song before. The opening riff I thought was from ACDC, then as the vocals came on I thought, no it sounds like John Fogerty of Creedance Clearwater Revival. I just couldn’t stop rocking to the beat. I put my exuberance down to a combination of a lack of sleep and excess caffeine consumption

Mike Stotter decided to film it.

When I got home, as I couldn’t get that song out of my head, I was amazed to find it was actually by the Hollies – a British band! And considering we were in for a crime-fiction convention, the lyrics seemed torn from the pages of a noir story. 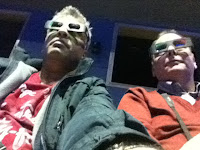 "Long Cool Woman in a Black Dress" was a song by the rock and roll group, The Hollies, and released on February 1, 1972 as a single on the Parlophone Records label.

It was released soon after Allan Clarke, who was featured on lead guitar as well as lead vocal had left the group, from their album "Distant Light" (1970). As the group had just left EMI/Parlophone and signed with Polydor, they did not promote the song. However it became a No. 2 hit in the , their greatest ever singles success there. It was inspired and in the style of the rock and roll group Creedence Clearwater Revival, and on being reactivated by EMI in a few months later, it reached No. 32.
The song is notable in that it features Clarke playing rhythm guitar, something he rarely did (Clarke came up with the song's signature guitar rhythm that opens the song).

Long Cool Woman in a Black Dress by the Hollies [1972]
Written by Allan Clarke, Roger Cook, and Roger Greenaway

I saw her heading to the table
Well, a tall walking big black cat Charlie said,
"I hope that you're able, boy
'Cause I'm telling you she knows where it's at"

Suddenly we hear the sirens
Everybody started to run
Jumping under doors and tables Well,
I heard somebody shooting a gun

Well, the DA was pumping my left hand
She was holding my right Well, I told her, "Don't get scared
'Cause you're gonna be spared
I'm gonna be forgiven if I wanna spend my living"