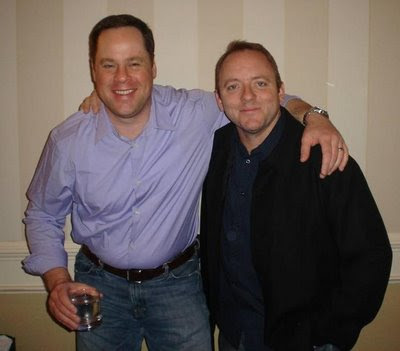 Today in Britain's Telegraph Magazine is an insightful interview and feature article on Dennis Lehane by British Journalist and writer Richard Grant, interspaced with some great photographs of Lehane in Boston by Jens Umbach. The interview was recorded in Lehane's home city prior to his UK visit next month. In the article Lehane is very candid about his writing, the films of his work, how amazed he is by his good fortune, how his sales were helped by Bill Clinton, as well as Stephen King and the debt he owes them.

It is a real pity that this feature is not available online, so for followers of Dennis Lehane and his work, I have transcribed some of the key points from the article / interview which gives tremendous insight into this hugely important writer.

“It took me five years to write ‘The Given Day’ and I never want to go through that again. I swear to God. A year of research. Then three years writing a first draft which I hated and totally missed the mark. I had to rip out the entire centre of the book and re-do it. That took another year and lots more fear and self-doubt. Welcome to the job you know. That’s what they pay you for.”

Lehane talks extensively about why during his childhood he recalls the Boston Police strike and how it stayed with him -
“I had a good sense of all that, but I really grew up in 1940’s Ireland. My Father had 17 brothers and sisters, my mother had 13, and a lot of them were in Boston when I was a kid. It was very much a village feeling and a verbal culture. They would all get together every Friday and Saturday night and tell stories, and when they started singing, you knew they were drunk. It was great. Looking back, I can see how all the right ingredients to create a writer were there.”

Grant’s feature indicates that Lehane started writing with what he describes as ‘crazy focus’. He had been bored by journalism so –

“Finally I decided to pursue this writing thing and I got a scholarship to this small college in St. Petersburg. My parents really wanted me to be a lawyer or something, but they really gave me their unequivocal support. So off I went. I was 20.”

“I was not going [to] be serving beers at the bar, like, ‘Hey, fucking Hemmingway, bring me a beer’. I wrote way more than anybody I knew, I threw it all out; I was attached to nothing because all I cared about was learning how to get better. I mean, I wanted to drink and get laid too, like anyone else, but on top of that was this intense feeling that I must get good at this, and then maybe I could publish.”

Lehane talks a little about the strength of his feelings when it comes to child abuse, which is a theme in many of his novels –

“I’ll break it down for you. I grew up in a pretty violent town at a pretty violent time. I’m a guy who will hit you back if you hit me. I will hit you as hard as I can and not apologise. But I do not have the gift or curse of fury. I saw friends who could not be pulled off, could not be reasoned with, could not be stopped. Gradually, as a kid, I began to make the connection, oh, he comes from a shit home. Then I got into social work at college. I worked with physically and sexually abused kids, and even beyond their horrendous stories I started seeing these kids who were victims of rape. And I started to think, how many people on Death Row were sexually abused? I bet it’s over 90 per cent. Because it adds one extra level of rage that the rest of us cannot even fathom.”

Not surprisingly, Grant who describes Lehane’s politics as ‘left of Canada’ on most social and political issues, is hardcore right-wing when it comes to Paedophilia. Lehane states his views and pulls no punches –

“First offence: Life in prison, no possibility of parole. I’ll give you steaks. I’ll give you a wide-screen TV, I’ll give you whatever you want in there, but you have lost your privileges to play in our sand-box. The risk to society is too great. These kids, their lives are over at 12. Statistically, they will lead marginalised lives with marginalised jobs, and they have a much, much higher likelihood of doing it to someone else. Paedophilia is a contagion. It gets passed on and it spreads and people who say it can be fixed have no knowledge of it.”

He adds “I’m without empathy for the disease. I don’t want to punish or hurt paedophiles, and after Mystic River I told myself that I’ll never write another book that hinges on paedophilia. I’ve said what I have to say. Now I’m done. Let’s talk about something else. In fact let’s get some lunch.”

Grant and Lehane continue the interview an Italian Restaurant.

Lehane orders Linguini and Clams and talks about getting an agent on the strength of ‘A Drink Before The War’ while still in college, and his agent sold it as he was graduating with a masters degree. Lehane returned to Boston writing his second novel Darkness, Take My Hand while being a valet parker and limousine driver. During that time Lehane got a further two-book contract and stated -
“It was just enough money to survive on if I carried on living like a student. It allowed me to write Gone, Baby, Gone, which was my first real success. Bill Clinton was filmed getting off Airforce One, in a heavily repeated clip, with the book [Gone, Baby, Gone] under his arm. That was a big spike in sales and name recognition. Two years later, Stephen King gave me some love, and that was the next benchmark in my career. I can’t say enough about Stephen King. Ask any writer. He is one of the most generous human beings out there. He’s gone to bat for the most obscure writers. He’s helped this writers’ conference I run down in St. Pete. What he has done to give back to the world of writing is titanic”.

I remember reading that Stephen King stated at the time - “In the miserably hot summer of 1999...the superb detective novels of Dennis Lehane--became a kind of lifeline for me.” And this line was used as a cover blurb on 'Prayers for Rain'.

Lehane talks about his biggest hit to date – Mystic River -
“It’s the most depressing book I ever wrote, in which everybody loses and you don’t even get any satisfaction finding out who the killer is. That’s the hit? Clint Eastwood wants to make into a movie? It doesn’t make any sense. I can only put it down to luck.” He continues “You can’t fall into that collective dream that people fall into when they watch a movie. If you’ve created it, you know it’s a fake. You’re watching artifice. Some of it is amazing artifice but the suspension of disbelief never happens. I just sit there feeling weird and I have to take it on faith when people tell me it’s good.”

Although writing a play Coronado, he talks at length about his work on ‘The Wire’ –
“My buddy George Pelecanos was writing episodes and he persuaded me to give them a call. They had to hold my hand a little bit at first. If you’re a novelist, you want to write great dialogue, and David Simon [the creator of The Wire] says the greatest piece of dialogue is in The Wild Bunch when William Holden says “Let’s go.” If everything that came before is working, that’s all you need to say, and anything more gets in the way. It took a while to understand that and it’s hard on a writers ego. We want to write a memorable line like, “What we have here is a failure to communicate,” not, “Let’s go”.

The article concludes explaining that Lehane is currently writing a TV series [of his own creation] as well as working on a new Patrick Kenzie and Angela Gennaro mystery thriller [his first after a ten year hiatus on the series that made his name]. And after all the struggles to produce ‘The Given Day’, he has now decided that it will be the start of a trilogy. He wants to follow the families through prohibition, the great depression and beyond. Despite all the problems he faced while writing ‘The Given Day’, Lehane states-
“You’ve got to go into these things feeling positive, and right now I feel great. I know all the steps in front of me. This time there will be no lying on the couch in a ball thinking ‘How the fuck am I going to get them out of 1918’”

Two other excellent and insightful interviews with Dennis Lehane from a few years back are available from January Magazine, firstly an exchange with Linda Richards where Lehane talks about Mystic River here and Karen Anderson’s interview about Prayers for Rain here