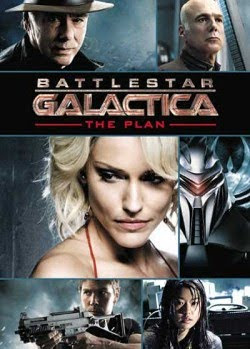 Being a huge fan of Battlestar Galactica, I have ordered the US DVD release of The Plan which went on sale this week to much anticipation.

Written by series writer Jane Espenson, Battlestar Galactica: The Plan begins before the attack on the 12 colonies and will show events mainly from the perspective of two Cylon agents. The narrative largely follows multiple versions of the Cylon models One (Dean Stockwell) and Six (Tricia Helfer), who have infiltrated the remaining humans, both on the planets, and those who have escaped into space. From there, the events of the television series are shown from a Cylon perspective, and their underlying plan is revealed in a way that will change your outlook on the new Battlestar Galactica series forever. Also starring Michael Trucco, Aaron Douglas, Dean Stockwell, Tricia Helfer, Grace Park, Rick Worthy, Matthew Bennett, Callum Keith Rennie, Michael Hogan and Rekha Sharma and directed by Edward James Olmos, Battlestar Galactica: The Plan blasts off on DVD and Blu-ray on October 27th.

Reviews are appearing all over; such is the popularity of Battlestar Galactica, and because of the frenzied anticipation, the word on the street though positive, is tempered due to the brilliance what came before THE PLAN -

There’s plenty of eye candy in The Plan, too: The space shots, nuke attacks and havoc wreaked on the colonies’ 12 planets are on par with the rest of Galactica’s gritty CGI look. There are also a few bits of gratuitous nudity, both male and female, that will doubtless be cut from this unrated DVD version when the movie airs on Syfy.

What The Plan doesn’t have is much in the way of heavy revelations. It also lacks a strong, standalone narrative. Perhaps most disappointing, the characters who made the series so compelling — Olmos’ steely fleet commander William Adama, Katee Sackhoff’s unpredictable fighter pilot Kara “Starbuck” Thrace, Michael Hogan’s irascible Saul Tigh — barely appear in The Plan. When they do, it’s usually in recycled scenes that will have fans of the series flashing back to the show’s glory days.

Galactica completists will eat up the tiny insights into the Cylon POV: the knowing smiles of skinjobs as mushroom clouds bloom over Caprica, the way Leoben (aka Cylon Number Two, played by Callum Keith Rennie) obsesses over Starbuck.

But there’s not much that would make sense to viewers who haven’t already seen Galactica. It’s hard to imagine, for instance, what a BSG virgin would make of the Beat-poet babble spewing from the mouth of the hybrid in the bathtub aboard the Cylon basestar.

If you haven’t seen all four seasons, explore the complete series and file The Plan for future viewing. If you’re a Battlestar Galactica fanatic, don’t place too much hope in this mediocre coda. Watch it like you would the deleted scenes on a DVD, and don’t let it scrap your memories of one of the most ambitious sci-fi shows of all time.

Fans of "Battlestar Galactica," like fans of most great science fiction (and, let's be honest, lots of mediocre to bad science fiction) tend to be a ravenous bunch — always eager for more from their favorite show.

So even though the series came to a very definitive conclusion back in March, and even though a prequel series called "Caprica" will debut on Syfy early next year, the "BSG" fandom is understandably psyched for today's DVD release of the new movie "Battlestar Galactica: The Plan." But the finished product, which mixes original scenes with archival footage, at times feels as if it meets the bare minimum requirements to qualify as new material.

Because the series finale (which many fans are still not happy with) closed off most avenues for a sequel, and because the series had such a tight story line, there isn't really room to tell a new story about these characters. Instead, writer Jane Espenson and director Edward James Olmos have to content themselves with filling in a lot of blanks — specifically, with showing the events from the series' first few seasons from the point of view of the Cylons instead of the humans.

So instead of Olmos' Admiral Adama as our central character, "The Plan" (which will presumably air on Syfy sometime next year) is built around Dean Stockwell as malevolent Cylon leader John Cavil, who we learned late in the series had engineered the genocide of humanity as an act of rebellion against his human-loving creators. We see Cavil and most of the other Cylon models (Lucy Lawless doesn't appear as D'Anna Biers) preparing for the destruction of all of humankind, then desperately scrambling once they realize they failed to kill everybody.

I truly admire Edward James Olmos for promoting the importance of "humanity" being united, as well as his work with underprivileged youngsters. It was good of the UN in conjunction with the SyFy Channel to welcome Olmos and many of the cast and workers from Battlestar Galactica to ehe United Nations on Humanitarian Issues committee.

So if you haven’t explored Battlestar Galactica – it’s time to behold one of the greatest TV series every filmed – and available on DVD.
Posted by Ali Karim at 6:52 AM