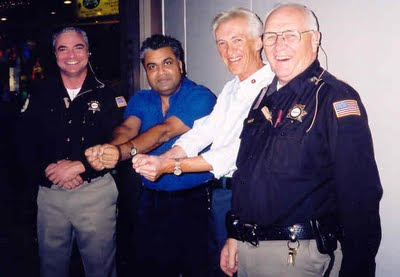 As a devotee of Crime / Thriller Fiction, I always enjoy my annual US trip to Bouchercon and/or Thrillerfest. It takes a lot of planning as I have a very busy life [as well as a lot of understanding from my wife and kids]. My family all know how much I enjoy spending time with my US friends and colleagues who share my fascination with books set against the thriller / crime fiction backdrop. I have a lot of fun talking about books with my friends and colleagues as this photo indicates - of Ken Bruen and I being escorted from the Casino High Roller area [in The Stratosphere Tower] as my impersonation of a Middle-Eastern Prince failed to get me into a $10,000 table. The problem was that Ken Bruen and I had been taking a “pub crawl” along the Las Vegas strip earlier that afternoon…..Probably just as well as I could have ill afforded losing $10,000 in Blackjack.

That was my first Bouchercon [in 2003] when I went with Shots webmaster ‘Grog’ to Las Vegas. Both ‘Grog’ and I turned 40 that year so we combined the Bouchercon experience with a tour of America’s South West, and California. That was a special time so I took a lot of photographs that help remind me of the time that now resides only in my memory.

I recall spending time [with this years Bouchercon Guest of Honour] Mike Connelly who attended the event, and who used the time to research ‘The Narrows’ – a novel that set Harry Bosch against ‘The Poet’ in a deadly game of cat and mouse on the outskirts of Las Vegas.

I see that the city of Indianapolis is gearing itself for close to 2,000 fans of Crime, Mystery & Thriller genre descending for Bouchercon 40.

Mike Connelly is featured in the Indy Star today –

Is this your first Bouchercon, or have you attended before?

I haven't been to one in at least four or five years. I do think the event's an important tool for writers in the genre. In the beginning of my career, and throughout the '90s, I attended a lot of them. It's a great place to network and meet all kinds of writers, because ordinarily we're spread out doing our own thing. It's not like you see a lot of other writers unless you go to conventions like this.

What will you be doing there this year?

I'll be doing a bunch of stuff. So many writers attend that it's almost all panels. Being guest of honor, you get to have the spotlight for yourself for an hour -- that'll be on Friday. Not being much of a speechmaker, I elected to have myself questioned by another writer for an hour. I'll also be participating on a panel on (Edgar Allan) Poe.

"9 Dragons" is your 14th book in the Harry Bosch series. How is it different from previous Bosch books?

For one, it's a fish-out-of-water story. About a third of it takes place in Hong Kong, where Bosch has to go to find his missing daughter. And as far as his daughter is concerned, it's really a story about Bosch's vulnerability. Harry Bosch is a guy who believes he has skill in rooting out evil, and intentionally bills himself as being invulnerable. But maybe five books ago, he found out he had a daughter he didn't know he had. This is the book where he realizes he could get gotten to.

Meanwhile the Indy Star also features a short piece from Jim Huang, co-chair of Bouchercon 2009. Included in the feature are comments from Terence Faherty, a tremendous PI writer who was on a panel - ‘Social Commentary in Crime Fiction” which I managed to moderated back in Las Vegas in 2003 despite intense sleep deprivation as this photo indicates [Faherty is on my left], flanked by Martin Edwards.

Last years Bouchercon in Baltimore was a very special time, amazingly organised by Ruth Jordan and Judy Bobalik. These links explain why Bouchercon 39 in Baltimore was so wonderfully special – The Photos are at The Rap Sheet, and my report is here - Part I, Part II and Part III

I am now packed, and ready to depart for Indianapolis on Wednesday, when the fun starts. I am usually like a vacuum when I leave Bouchercon, as I get very little sleep, and feel melancholic saying goodbye to my friends and colleagues [until next year]. However this year I have the CWA Dagger Awards in London to occupy my sleep-deprived mind on my return.

I will have plenty of photos and stories of my adventures from Indianapolis when I get back – So have fun while The Existentialist Man is at Bouchercon
Posted by Ali Karim at 7:33 AM