Lehane opens up on sHuTteR iSLaNd 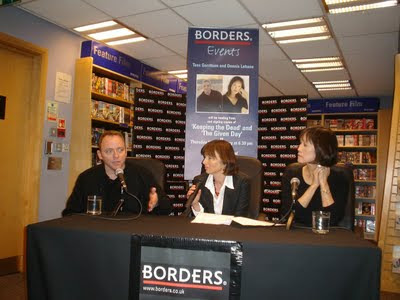 I consider Shutter Island one of the greatest gothic thrillers written in the last ten years, and was somewhat dismayed to read that the film release has been delayed until 2010. Dennis is a busy guy, working on a sequel to Gone, Baby, Gone [the original novel was filmed to much acclaim by Ben Affleck]. Now he’s on the road talking about the PB release of The Given Day as well as the Akashic Books collection Boston Noir that he edited.

I was delighted to read this comprehensive two part interview with Dennis Lehane from Peter Keough of The Boston Phoenix, from which these interesting nuggets are revealed –

PK: I think a big reason Boston is becoming such a setting for this type of movie is clearly your success in film. What do you think is cinematic about your books? You look at them and they're very dense in terms of characters' psychology and the writing is very fine, it doesn't seem the kind of thing that would translate immediately into movies.

DL: You know, I totally agree with you. I've written one original plot in my life and that was "Shutter Island" and even that is wearing it-the homage is on its sleeve-I'm not a real strong, I'm not an original plot guy. You know, "Mystic River" is the plot of an old 1930s RKO movie, so I don't know what started it, what originally brought people to work. I know now, and I flavor them up, and so I produce a laundry list and everybody's like, "Ooh that could be a good movie, could get an Academy Award out of that." I think the success of my movies is very clear on what it is and it is to me. There were no extra cooks in the kitchen and in each case I had sort of auteur theory in play and you had Clint Eastwood, Brian Helgeland, that's "Mystic River," that's it, end of story. "Gone Baby Gone" was Ben Affleck and Aaron Stockard, end of story, the Weinstein brothers left them alone and Martin Scorsese comes in and he's a 500 pound gorilla and he says "This is what I want to do," so none of my films have a lot of fingerprints on them.

PK: What's the story with "Shutter Island?" It's been postponed until February; is that something we should worry about? I was disappointed to hear that it wasn't coming out in November.

DL: No, you shouldn't worry about it, I can say this without ego because I had zero to do with the production of that film, I mean I'm an executive producer, yeah, you know, but I had zero-my fingers are not anywhere near that outside of the book and so I can say having seen the film that it's brilliant. I think the story that they put in the press is mostly true which is that they didn't have the money, the market and in a year in which very solid films, like "Public Enemies" and "State of Play" clearly under-performed, I think everybody's scared. So they said, they want to go back, they decided let's have a really good marketing plan before we pull the trigger on this.