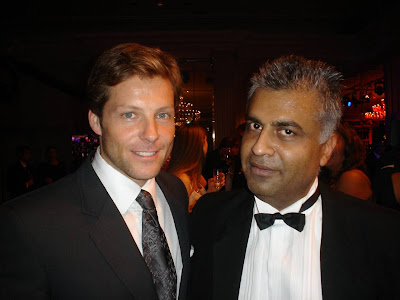 Many of you may realise that I have become totally obsessed by the Battlestar Galactica series. During The World Mystery and Crime Thriller Convention Bouchercon held in Indianapolis – my dear friend Jon Jordan and I swopped DVD’s and Books. I brought over the latest British releases of Ashes to Ashes, Spooks series 7, Spooks Code Red and others, while Jon and Ruth kindly brought the US Ultimate Boxed set of Battlestar Galactica for me. The US set is far superior to the UK set, as it contains features such as the Web-Episodes which were missing from British set. Jon Jordan is also as big BSG fan, and he sported a ‘FRAK ME!’ badge. Even David Morrell remarked on the badge when he met Jon and I, as he too is a big BSG fan. Jon was telling me about when he met Edward James Olmos [Adm. William Adama] at a recent comic convention in the US. Well in peculiar twist of fate, I bumped into British Actor Jamie Bamber who play’s Adama’s surviving son at last week’s CWA Specsavers Dagger Awards in Grosvenor House in London.

I had a great chat with Bamber [pictured on the right with me in fan-boy mode], and we were equally confused why BSG is not as huge in the UK as it is in America. Bamber told me that he felt hugely privileged to be part of BSG as he considers it one of the best acting gigs he’s had. “Working on Battlestar Galactica will take some beating” he said, and he’s right because I feel it is one of the greatest TV series I have ever watched. Each episode is like listening to the dials of a ‘safe’ click open, as the elements of story, acting, visuals combined with the theological / moral / quasi-religious themes make it completely hypnotic.

Now the countdown for ‘The Plan’ is ticking, which is due for release tomorrow reports The Philadelphia Daily News -

"LET'S GET this genocide started."

For die-hard "BSG" fans, though, the line from "Battlestar Galactica: The Plan" is bound to come across with its full measure of dark comedy. And die-hard fans are the only logical targets for "The Plan," which goes on sale tomorrow on Blu-ray, DVD and through digital downloads.

Written by "BSG" executive producer Jane Espenson and directed by Edward James Olmos, who reprises his starring role as "Galactica's" Adm. William Adama, the 90-minute feature revisits the futuristic series about humanity's struggle against its own creations, the Cylons, from the Cylons' point of view.

Which means that Stockwell's Machiavellian Cavil gets more face time than he probably ever has before, a development that may not sit so well with fans of the more sympathetic - and gorgeous - Cylon No. 6 (Tricia Helfer), who's featured far more prominently on the DVD jacket.

When Olmos told fans at San Diego Comic-Con this summer that "The Plan" would make them want to watch the whole series over again, I'd honestly thought he was just plugging the series DVD.

He's right, though. Because in slicing off the Cylons' version of events, the movie necessarily telescopes large portions of the series, which ran for four seasons on what used to be called the Sci Fi Channel. If you lost track of that action at any point, you're bound to be wandering in the wilderness for long stretches of "The Plan."

Battlestar Galactica is the best Frakking TV series I’ve ever seen “So Say We All”
Posted by Ali Karim at 12:09 PM