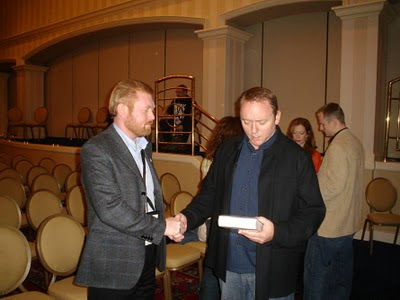 Is there no media outlet left for the talent of Dennis Lehane to explore?

First we have his best-selling novels, film adaptations from Clint Eastwood’s Mystic River, Ben Affleck’s Gone Baby Gone and this year’s Shutter Island from Martin Scorcese as well as the Graphic Novel from Christian De Metter.

Now it seems, Dennis Lehane is grabbing a joy-stick and heading into computer game territory with Film Director Sam Raimi – according to Entertainment and Showbiz -

Meanwhile news comes to us that [Sam] Raimi is planning to kickstart another franchise: “The World of Warcraft” written by novelist Dennis Lehane, whose novels Mystic River and Shutter Island has already being transformed into celluloid screen.

So the change in crew means there will be no sequels to Spiderman 3 but now we are going for a prequel ride, hope the new movie comes up with the same magic and action, though fans will be sad for the departure of the old team who have taken the webslinger franchise to a new height and so is Columbia Pictures President Matt Tolmach as he said: “This is a bittersweet moment for us because while it is hard to imagine Spider-Man in anyone else’s hands, I know that this was a day that was inevitable.”

Read More here and from The Film Stage Here it seems that Sam Raimi has cancelled plans for Spiderman IV, and got to know Dennis Lehane following his purchase of the rights to The Given Day.

Photo © 2008 Roger Ellory with Dennis Lehane at Bouchercon Baltimore
Posted by Ali Karim at 4:00 AM