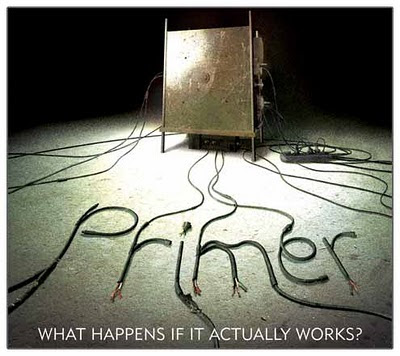 “They took from their surroundings what they needed, and made of it something more.”

A few years ago, I watched an extraordinary independent science fiction film called PRIMER written, directed and starring a young man called Shane Caruth. I got word of the film in 2005, when it was the talk of the Sundance Film Festival in 2004, winning the Grand Jury Prize.

When the DVD was released, I grabbed a US NTSC copy, which over the last 4 years, I must have viewed a dozen times, and with each viewing, I get another perspective of what I just viewed, and what it meant. What makes it even more interesting is that it allegedly cost $7,000 to make and Caruth refused to pander to the lowest common denominator – making it a truly complex and thought provoking viewing experience.

With its theme of ‘time travel’ underpinning the framework of two friends and their relationship that disintegrates when they start using their ‘machine’; Primer not only entertains, but also provokes very deep thought about our various reflections of the reality that confront us.

On New Year’s Eve, my son and brother-in-law watched it with me, and it certainly made them think. Of course the instant reaction was – “We need to watch this again” – and they remarked, “You love watching weird things” which made me proud.

I guarantee if you watch the first ten minutes of Primer; listening hard to the creepy and surreal narration that opens the film – you’ll be hooked. The weird thing is that Caruth’s main co-actor is David Sullivan who noticed my twittering about Primer and replied back, which freaked me out a little that night.


I would however point out that repeated viewings are essential and ethically you should buy a copy here on DVD.

Trust me, PRIMER will alter the way you view what surrounds you; what we commonly label as ‘reality’ – you have been warned.

If you don’t trust my judgment, then read Roger Ebert’s analysis of Primer –

"Primer" is a puzzle film that will leave you wondering about paradoxes, loopholes, loose ends, events without explanation, chronologies that don't seem to fit. Abe and Aaron wonder, too, and what seems at first like a perfectly straightforward method for using the machine turns out to be alarmingly complicated; various generations of themselves and their actions prove impossible to keep straight. Carruth handles the problems in an admirably understated way; when one of the characters begins to bleed a little from an ear, what does that mean? Will he be injured in a past he has not yet visited? In that case, is he the double? What happened to the being who arrived at this moment the old-fashioned way, before having traveled back?The movie delights me with its cocky confidence that the audience can keep up.

"Primer" is a film for nerds, geeks, brainiacs, Academic Decathlon winners, programmers, philosophers and the kinds of people who have made it this far into the review. It will surely be hated by those who "go to the movies to be entertained," and embraced and debated by others, who will find it entertains the parts the others do not reach. It is maddening, fascinating and completely successful

Note: Carruth wrote, directed and edited the movie, composed the score, and starred in it. The budget was reportedly around $7,000, but that was enough: The movie never looks cheap, because every shot looks as it must look. In a New York Times interview, Carruth said he filmed largely in his own garage, and at times he was no more sure what he was creating than his characters were. "Primer" won the award for best drama at Sundance 2004.