Peter James back on top 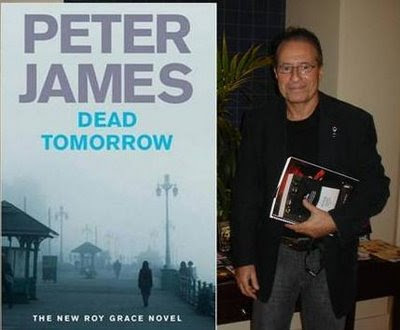 A writer who I admire, both as a businessman and film producer as well as a novelist is Peter James. I seem to have been bumping into him on a regular basis recently, and he is extremely generous in his nature as well as his time. James also is always brimming with information and trivia, so when in his company I always feel completely at home. Considering his highly successful and award-winning Roy Grace Police Procedurals, he remains one of the most modest people I know. I was pleased to see him joining Twitter, but considering his technological background I was hardly surprised. I strongly recommend his latest DEAD TOMORROW [the fifth novel in the award winning Detective Superintendent Roy Grace crime series] –

Lynn gripped the sides of the armchair, trying to p\ut aside her own inner terror. 'I can't believe I'm thinking this, Ross. I'm not a violent person, even before Caitlin's influence, I never even liked killing flies in my kitchen. Now I'm sitting here actually willing some stranger to die'.

The body of a teenager, dredged from the seabed off the coast of Sussex, is found to be missing its vital organs. Soon two more young bodies are found...
Caitlin Beckett, a fifteen-year-old in Brighton, will die if she does not receive a liver transplant, urgently. When the health system threatens to let her down, Lynn, her mother turns in panic to the internet and discovers a broker who can provide her with a black-market organ - but at a price. Prepared to do whatever it takes, Lynn scrambles to raise the money. A few days later, with Caitlin deteriorating by the hour, the organ broker tells Lynn she has found a perfect match.

With his beautiful girlfriend, Cleo, and his recent promotion, Detective Superintendent Roy Grace knows he should finally be feeling positive for the first time since his wife Sandy disappeared, nine years ago. But this new case haunts him, even more than all the others. Following the clues from the bodies, he finds himself on the trail of a gang of child traffickers operating from Eastern Europe. Soon Grace and his team will find themselves in a race against time to save the life of a young street kid, while a desperate mother will stop at nothing to save her daughter's life.

It was little surprise to see that Dead Tomorrow hit the UK top ten this week.

Peter James kindly invited Shots Editor Mike Stotter and I [with Carla McKay and Barry Forshaw] for lunch at the prestigious Ivy restaurant during the Christmas Holiday. We discussed many matters, including his latest novel –

Were you bookish in your youth?

Yes, I was an avid reader – also an avid letter-writer to authors. I once wrote to Enid Blyton saying that I had just read Five Go To Treasure Island and I was very worried that the five of them had spent seven days on an island and not one of them had gone to the toilet in all that time. She wrote a nice letter back telling me not to worry, they had all gone several times but she didn’t think little boys and girls were interested, which was why she hadn’t put it in her book!

What books had you read in that period that perhaps led you to become a fiction writer yourself?

I really wanted to be a crime novelist when I began reading Sherlock Holmes at about twelve years old. Then one day in my mid-teens I read Graham Greene’s Brighton Rock and I was totally blown away by it – probably even more so because it was set in my home town. I promised myself that one day I would try to write a crime novel set in Brighton that was just half as good as this one.
What I love most about this timeless novel is that it is both a thriller and a crime novel, although police play only a tiny part. The story is almost entirely told through the eyes of the villains and two women who believe they can redeem them. Greene has a way of describing characters in just a few lines that makes you feel you know them inside out, and his sense of "place" is almost palpable. The book has one of the most grabbing opening lines ever written, and one of the very best last lines, clever, tantalising and very, very "noir". Greene captures so vividly the dark underbelly of Brighton, as relevant now as when it was first published in 1937, and the characters are wonderful, deeply human, deeply flawed and tragic. What lifts this even further is the way that Greene uses this novel to explore the big themes of religious faith, love and honour, without ever letting the pace slacken, for even one line.

More information on the world of Peter James can be found from the following links: