“If you begin to understand what you are without trying to change it, then what you are undergoes a transformation.”
Jiddu Krishnamurti

‘Self-Awareness’ increases as we age, and is most evident in those that ‘think’ and contemplate their place in this shared reality, and therefore can cope better than those that live like dust particles in the Brownian Motion tube, unthinking and buffeted by the random wind we term fate.

Today, something happened in my lunch hour that illustrated the causal link between what I saw [and considered] about to happen to me, and my reaction to what appeared on my ‘Event Horizon’. What I saw, and interpreted through the prism of my consciousness was wrong, totally wrong. The stimulus of the approaching ‘event’, was filtered through my consciousness, and as I got ready to confront what I perceived to be trouble and braced myself for what I perceived to be danger, I understood why I made this miscalculation. It was much later when I ruminated over the incident, and became ‘self-aware’, I realized I had viewed the upcoming event through a parallax view. The conclusion I came to as I saw events unfurl in front of me, was wrong, but most crucially I understood why I had seen things through a parallax, because I understood myself – with due consideration of my frame of mind and frame of reference - that was specific to that situation, and the context of my thinking at that exact time. 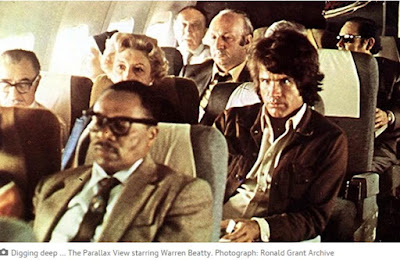 So before I detail the incident, let’s take a look at my frame of reference, what my mind was engaged with, grappling with - when the incident kicked off, because from that I realized I viewed the event through a parallax.

I am living under a great deal of stress currently, and I think [with all due modesty] I’m managing it well, though it is hard on the mind. Specifically, I have our children scattered around the world, my wife is away looking after her elderly father, while my own elderly parents take some of my time; being the eldest son, and the one who lives closest by.

The business I co-founded over a decade ago is going like a freight train, which is great, but takes a huge slug of my time to manage as I’m not involved in the distribution of Baked Beans and Toilet Rolls, but problematical and heavily regulated products.

I have agreed to work, in a senior role and in a pro-bono capacity on a major event this autumn [Fall], and the time is getting closer, and expectations high. When I ponder in my dark moments why I agreed, back in 2012 in a bar in St Louis, MO to carry out this role, I realise I did so, as a way of saying thanks to the people who have given me so much pleasure over the years at these events. Coupled to that, I have been asked to be a proposed speaker at an upcoming TED TALK; something that is as prestigious as it is time consuming.

I also sit on two Boards, chair a working group, am a Company Secretary, and a Fellow of three Institutes, and a literary judge for The Crime Writers Association, Assistant Editor at www.shotsmag.co.uk - so I am basically a busy bloke.

How I cope, is a combination of a very understanding family, hyper organisation and my obsession with crime, mystery and thrillers which is my method of coping with reality and life, as this short BBC TV interview from World Book Night in 2011, indicates.

An active imagination and an addiction to reading [and watching] crime, mystery and thrillers can also have an effect on your cognition that you need to aware of. One such effect is a heightened sense of awareness, which some would call paranoia. Excessive reading about the dark side of human nature has consequences. I find it allows me to cope with life, a distraction to keep my consciousness occupied, trapped, engaged and away from rumination and dark thoughts about our ‘existence’; something that troubles many of us manifesting itself as ‘existential angst’. 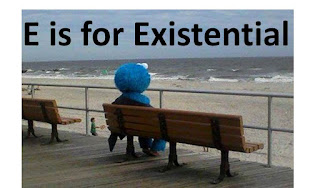 The problem is that all this “living in my head”, has another side-effect, which when all things are considered, is actually useful – the heightened sense of awareness, and therefore becoming actively ‘self-aware’ coupled with an understanding on how disingenuous can be our ability to ‘rationalise’ our actions, “as to” the situation we find ourselves in – and therefore justifying our actions, in the theatre of life, and the ashes of our death.

Today’s Event Horizon
Today, I woke with a troubled mind as I have much going on externally, as well as internally in my mind. My ruminations create stress, which I try my very best to channel in a positive manner. Over the years, I have found as uncomfortable as it is to grapple with the stress created by a troubled mind, the ruminations of my consciousness often result in finding solution[s] to what is troubling me. I find it very useful in problem solving and in business, especially as the ruminations are often prompted by reading detective novels.  I also find the act of writing helps ease the existential angst that are my thoughts, once committed onto paper like here, here, here and expanded upon as my world view here, I feel a weight lift.
Anyway, with a very busy and troubling start to the day, I went to Tesco, a local supermarket to get my lunch, a Tuna and Cucumber sandwich and some Cranberry juice. On the way back to my car, as I unlocked the door, I heard a shout.
“Hey, You!” I ignored the shouting as I unlocked my car door.
“Hey, You!” He shouted again, louder and as I turned my head, he was running toward me. He was a big bloke, mid-twenties all skinhead and muscle with a face molded into an ugly grimace.

“Hey, You!” He shouted again. People were looking over as he raced toward me. I realized I was at an event horizon, something was going to happen. Due to my stressed mind, I threw my Tuna Sandwich and bottle of Cranberry Juice into the car, shut the door, and braced myself. In that split second, I had thought he was some thug, and perhaps was bringing trouble to my door. Due to my troubled mind, circled with worries and stress, I had decided, fuck it, if he wanted a fight, he’d get one. With many onlookers, I realized I would have witnesses so I turned toward him and made myself rigid and braced for an attack. I recalled my youth, and the fights and thought if he throws a punch, I will not only defend myself and though I’m a middle-aged businessman, and my stamina is not what it used to be, I knew I could take him down, I just needed him to throw the first punch, and then I’d knock him down, hard. The act of defending myself would be helpful, a cognitive release; like an archer pulling back a bow and releasing all that kinetic energy with a solid defensive blow, so I felt my arms tense, muscles locked and eyes ready.

“What’s you problem?” I said cautiously as he approached.
“Not mine, yours”, he said pointing at my rear tyre.
With one eye on the big bloke, and the other on the tyre, I saw a sliver glint.
“I noticed the nail in your tyre, and when I saw you approach your car…” His face was no longer coated with the visage of aggression, but with a warm smile. “I’d get that looked at sooner than later” he continued.

I thanked the man profusely, and realised that I had viewed the incident in parallax, allowing my stressed mind, and my paranoia fuelled by reading crime / thriller fiction to totally misinterpret the situation I saw unfurl in front of my eyes. 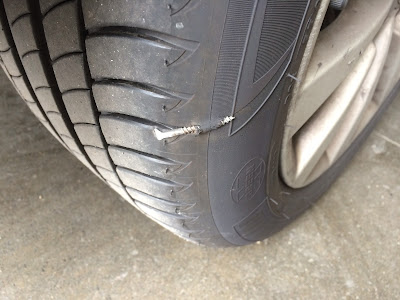 As I sat waiting at ATS for my tyre to be checked, I thought of how treacherous our cognition can become, given the right situation and circumstance.

I also thought of Warren Beatty, and Alan J Pakula, and I felt a calmness spread over me as I again understood myself, and the problems and stress that circled me like wild horses started to dissipate.

I also felt a wave of déjà vu, as if this had happened to me before, as Membrane Theory postulates. Either way, at least I thought through and analysed my actions, and therefore helped understand myself. 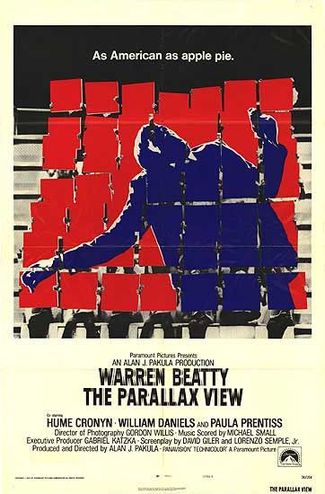