The Return of The Lineup 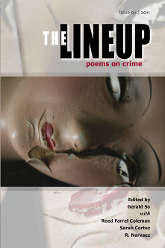 It seems like yesterday that Gerald So and the Gang started publishing poems with a criminal theme. Now with Volume 4 out on release from The Lineup Editors Gerald So with Reed Farrel Coleman, Sarah Cortez and R. Narvaez, this new collection features many well known names in the genre such as Ken Bruen, David Corbett, Stephen Jay Swartz and many others.

The most important aspect in writing thought-provoking fiction comes with the editing process, as well as the sparseness in the prose to allow the imagination to populate the proceedings. No better medium to illustrate this than the art of poetry, and Lineup 4, has some work that will imprint themselves onto the psyche like that trajectory of a ricochet. Both Bruen’s [Funeral: Of The Wino] and Coleman’s [Slider Part 7] respective contributions fall in that category, and it is interesting to see how such hardboiled writers tell a tale in short form, which contrasts their collaboration ‘The Tower’. I think another appealing quality of this collection is that it intrigued me to seek out some of the writers who I was unfamiliar with, hunting down their prose.

Gerald asked which of these poems was my favourite, which is a tough call, but I have to say that I have a soft spot for David Corbett’s ‘Bargain’ which is a ‘story’ spoken in a darkly lyrical style.

In case this volume has wet your appetite then why not contact Gerald as The Lineup 5 is open for submissions but remember, some of these short pieces remain long in the mind after the book is put down.To order your copy of The Lineup 4 as well as catch up on the preceding volumes click here

Gerald has fixed a blog tour to showcase some the work from contributors and reader / reviewers here
Posted by Ali Karim at 10:55 AM No comments: