Beware The Ides of March 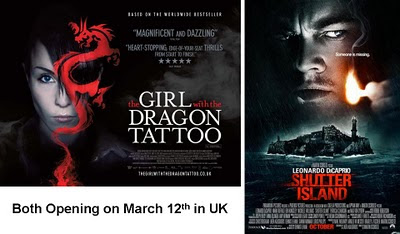 As a student I studied Julius Caesar by William Shakespeare, and being named Ali, growing up in the 1960’s / 1970's meant that when it came to cast the school production; my deeply-racist drama teacher cast me in the role of Cassius; as one of my [many] nick names growing up in those days was ‘Clay’. I used to have to fight a lot of wankers & bullies, being the only black kid in the school. Many wankers wanted to fight me due to Mohammed Ali [aka Cassius Marcellus Clay] being in the spotlight a lot; and being a sucessful black man was something new for many people to accept. I am glad I was named Ali; like in the Johnny Cash song 'A Boy Called Sue' - if you know what I mean.

I digress as ever.

The soothsayer’s warning line from Julius Caesar ‘Beware the Ides of March’ seems somewhat apt to me today, as on March 12th - two of my favourite contemporary novels hit the silver screen on the same day in the UK. Fortunately I’ve already seen ‘The Girl With The Dragon Tattoo’ in a press screening last year, so my ticket for Dennis Lehane’s sHuTtEr iSLanD is organized.

I for one do not fear ‘The Ides of March’ – in fact I am rather looking forward to them as both novels like a punch from Ali, float like butterflies, but they linger in the mind like a sting from a bee
Posted by Ali Karim at 6:44 AM 2 comments: