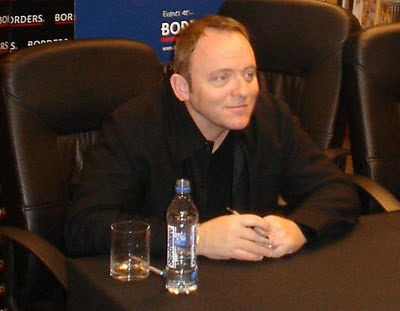 This is the first film that you are on board with as a producer. Can you talk about that experience working with everyone on the film?

Dennis Lehane: Oh, it was great. I just wanted to be involved as a producer because, at that point, I didn't have Shutter Island for several years and gotten it back, gotten the rights back, and I wanted to protect this a little bit. I wanted to be involved with really good people and I wanted to have conversations with those really good people about talent and that was sort of the limit of my contribution to things. The secret of my success is refusing to get involved with anybody who doesn't have a certain level of quality. I just won't do it. I have no problem walking away and leaving a bunch of money on the table. It doesn't bother me.
There was a quote from you that I read where you said that you wouldn't want to adapt one of your own novels because it would be like operating on one of your own children. What is the process for finding a screenwriter for one of your books? Is it like finding a spouse for one of your kids then?
Dennis Lehane: No, I think it's more like finding a really good contractor to work on your house. They're going to be in your shit for a few months (Laughs) and it probably could be aggravating unless you go with someone you really respect. The process started with, when Clint Eastwood and I chose Brian Helgeland for Mystic River, we were 100% in agreement on. We chose him based on what he had done with L.A. Confidential, which was just an unadaptable book and he adapted it. Once you see the gifts on display with really great adapters, just step out of the way, is my feeling. I am not a really good adapter. I think I am a good novelist and I think I'm a good teleplay writer and I think I'm even a decent screenwriter, but I'm not a good adapter. It's a different skill set, it's a different art form and the people who are good at it, man, all you do is sit back and take your hat off. I don't know what else to say about them. They're just a different breed.
Helgeland is one of the best. His adaptations are usually phenomenal.
Dennis Lehane: Oh, yeah. And Laeta Kalogridis killed this, Shutter Island. She just nailed it. I could see in Ben Affleck and Aaron Stockard's script for Gone Baby Gone, the same thing. They just got it, whatever it is that I couldn't have gotten. I couldn't do it with my own work. I probably could do it with somebody else's, because you have perspective but when I try to do my own work, I just lack perspective.I saw one of the DVD clips and you were talking about how when Leonardo DiCaprio came in, he was asking you all these questions about the character that even you couldn't answer.
What was it like to work with someone who is such an immersive actor like Leonardo is?
Dennis Lehane: Well, for the writer, a lot of times, we've kind of moved on and he's living in that present tense because he's playing the character. When he's asking me those questions, it was about five years after I had written the character, it was like, 'Wow. If only it was five years ago,' you know what I mean? Or maybe I just should've read my own damn book before I came to meet him. Yeah, he had that same kind of - him and Sean Penn have this real uncanny intelligence, in terms of their characters. I can't describe it, you just have to see it. You see the results on the screen, so it's not that hard to believe. 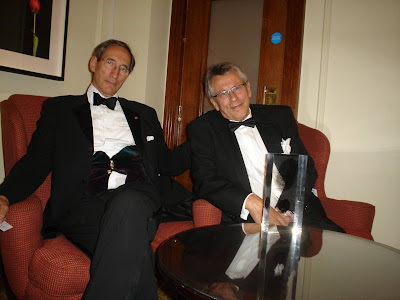 Photo © 2008 A Karim – Christopher MacLehose and Erland Larsson after the ITV-3 Crime Thriller Awards at Grosvenor House London
Posted by Ali Karim at 11:27 AM 5 comments: