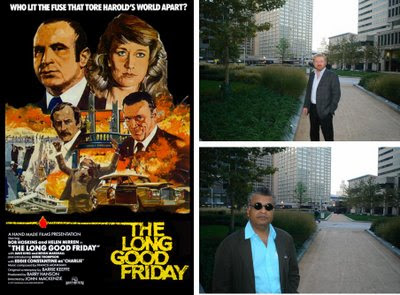 The Convention hotel was The Baltimore Sheraton, but we stayed at the overflow hotel which was the historic Radisson Lord Baltimore which was connected by a footbridge. This was a great move as it was within walking distance to the epicentre of activity, but also quiet enough to retreat when one needed time to come up for air.

The panels were all themed to music tracks, with me moderating a session on Alcohol and Crime Writing entitled “I can’t stand-up for falling down”; which was a lot of fun tackling a serious topic with Ken Bruen, Jason Starr, Elizabeth Zelvin, Michelle Gagnon and Con Lehane. It was helped by me drinking heavily during the discourse much to the amusement and alarm of my panelists. I was also on a book reviewing panel with Lee Child and others and again, one of the features of Bouchercon is that the panels fill to standing room only. There were so many that it would be unfair to name them all, except perhaps the funniest “Would I Lie To You” Featuring Mark Billingham, Laura Lippman, John Connolly, Chris Mooney and Karin Slaughter. The highlight was discovering that John Connolly has an erotic soft spot for the actor Daniel Day-Lewis.

There was a decidedly anglophilic feeling during the event as we had many Brits making the trek across the Atlantic; many for the their first Bouchercon such as Martyn Waites, Jason Goodwin, Tom Cain, Adrian Magson, Stuart MacBride, Sophie Hannah and Roger Ellory. While experienced hands such as Lee Child, Ann Cleeves, Martin Edwards, Val McDermid, Stephen Booth, Peter Robinson, Lauren Henderson, Mo Hayder, Peter James, Zoe Sharp and Natasha Cooper mingled with fans, editors and fellow writers. The Irish also came in force with Russel Mclean, Ken Bruen, John Connolly, Declan Burke and Declan Hughes all adding their Celtic touch to their US readers. The international flavour was added with Icelandic CWA Gold Dagger winner Arnaldur Indridason. Meeting him at a drinks reception was a real pleasure, as ‘Jar City’ [UK Title ‘Tainted Blood’] has to be one of the greatest European Police Procedurals I have ever read. To celebrate his appearance not only did St Martins Press organise a cocktail party in his honour, but also arranged a screening of ‘Jar City’ – a wonderful adaptation. Yes, there was a screening room and films all weekend on top of panels, drinking and parties. Talking of parties, the event was awash with them. Particularly pleasant were the St. Martin’s cocktail party, Meet the Brits, and Lee Child’s annual Jack Reacher bash in an Irish bar called ‘Lucy’s’. This was a real buzzing event, but in a rather ropey area of town, that caused an issue when Roger and I made our way back to the hotel through ‘The Hood’.

It was a rather frightening experience, but thanks to reading so many thrillers, and both knowing lines from the classic London gangster movie - “The Long Good Friday” - Roger and I put on our grimmest Jack Reacher whiplash smiles and spoke loudly in tough faux London Gangster accents. That was enough for the hooded Baltimore men to part the pavement and cross the road to allow us through.

Without sounding jingoistic, as tough as American gangsters are; there’s nothing scarier than a British Baddie to really put the fear of God into an American Baddie. Reading a lot of thrillers and crime fiction can have its upsides. However I must warn you, that snarling in a loud cockney accent on the streets of Baltimore is not really recommended unless you are prepared to imitate lines from the classic London gangster movie ‘The Long Good Friday’. So I whispered the plan to Roger, and then nudged him as the thugs approached, to get him into character and into cockney -

Ali - "Notice anything unsual? Different Nobbers, or the usual Wifflers?"

Roger - “It was a good night. Nothing unusual”

Ali - "Nothing unusual, he says! Eric's been blown to smithereens, Colin's been carved up, and I've got a bomb in my bloody casino, and you say nothing unusual?”

Ali – “When was this then? When was this then? Is that all you can say you fucking Nobber! I'm glad I found out in time just what a partnership with a wanker like you would've been. A sleeping partner's one thing, but you're in a fucking coma! No wonder you got an energy crisis your side of the water - The Mafia, I shit ‘em! the world's full of Wifflers!"

The Baltimore hoods just moved away crossing the street, while Roger did his best to keep a straight face as I trembled with fear [but the hoods assumed it was with anger]. It was lucky that Mike Stotter wasn’t with us, as he’d have started singing which wouldn’t have worked as an angry Asian version of Bob Hoskins is far more threatening and sinister, than a cockney chimney sweep from Boston.

When we got back to the hotel intact but shaking, Roger and I drank hits of Scotch on the rocks to reduce the leg trembles.

We had been warned by Laura Lippman in her welcoming address about how tough and dangerous Baltimore is at the edges. Lippman had advised us that although her hometown Baltimore is a lovely place, it does have 3 to 6 murders a week, and there are certain districts we had to avoid.

To be continued
Posted by Ali Karim at 9:33 AM