Gerald and Ali Go To Bouchercon

Many attend Bouchercon to meet their favourite authors; but I also love to meet the enthusiasts who help support the Crime / Thriller genre, with reviews, interviews and their own writing. The enthusiasts publish books, magazines, fanzines, blogs, web-zines, organize conventions, conferences and festivals as well as involvement in award judging – and much of this work is more a labour of love than for financial gain. The enthusiasts [or as George Easter calls them ‘Uber Fans’] have become a family – meeting up at conventions worldwide, and their enthusiasm is infectious and always good-natured. ‘The Daddy’ of conventions is of course Bouchercon, though there are many others such as Thrillerfest, Left-Coast Crime, Harrogate, Crimefest, Murder in the Midlands, Love is Murder, Magna-cum-Murder et. al.

Last year the biggest gathering of enthusiasts occurred at Bouchercon Baltimore. We had Jiro Kimura from Gumshoe Japan, Maggie Griffin, Jeff and Beth of Cincinnati Media, Janet Rudolf of Mystery Readers International, The Deadly Pleasures crew led by George Easter and Larry Gandle, Sarah Weinman, Dana Kaye, The Jordan clan from Crimespree, Jim Huang of the Drood Review, Peter Rozovsky, The Mystery News and Mystery Scene gang, Jeff Pierce from The Rap Sheet, Linda Richards from January Magazine, The Strand Magazine team, David Montgomery of Mystery Ink, Rae Helmsworth, Gangs from Dorothy L and Rec.Arts.Mystery [RAM], Maddy Hertbruggan and her cabal from 4-MA, Gerald So of Thrilling Detective, Sandra Ruttan and Brian of Spinetingler, Russel Mclean of Crimescene Scotland, Ayo Onatade from Mystery Women, as well as myself with many hats including my bullet-ridden Shots, Rap Sheet, Deadly Pleasures, Crimespree, Books and Bytes, Mystery Readers International and CWA Red Herrings Hat[s]. I should also add that there were more bloggers than you can toss a mouse at, and far too many to name here. Apologies for those I haven’t mentioned here, as the genre is healthy despite all the economic gloom that pervades the media.

Events, such as last year’s Baltimore Bouchercon allowed enthusiasts who communicate with each other on the internet, to actually meet in person. Word of mouth today is driven by the internet, so it is good to actually meet physically, and the convention is a brilliant method of linking the enthusiasts – and considering the global reach – as we are all scattered around the world, it’s great fun to sit back and physically meet each other, rather than just Twitter.

I was delighted to actually spend some time [last autumn in Baltimore] with Gerald So - after many years of reading his work as fiction editor at Thrilling Detective, his blogging, his Twittering and his work as editor at ‘The Line-Up’. Gerald and his fellow co-editors Patrick Shawn Bagley, R. Narvaez, and Anthony Rainone have now produced Volume II of their collections of Crime-Fiction Poetry. Gerald kindly asked me to contribute to this volume, but due to my usual deadline juggling battles was unable to meet the timeline. I got my copy of ‘The Line-Up’ Vol II and was very impressed to find amongst the collection, pieces by award-winning poet Sophie Hannah as well as CWA Diamond Dagger Winner John Harvey both of whom incidentally attended the Baltimore event last year.

I strongly urge you to grab both volumes – which you can order here and if you’re not convinced, let me leave you with a few lines from someone who is far more persuasive than I -

"Like the best crime fiction, the best poetry concerns itself with mortality and anguish, and The Lineup explores this terrain with a candor and fearlessness that is sure to shake readers from their slumber. You can keep your 400-page tomes with their windy, discursive narrators -- this is the real stuff, as concentrated and corrosive as a shot of 190-proof Everclear."
— Charles Ardai, award-winning author and co-founder of Hard Case Crime

I really enjoyed chatting with Gerald in Baltimore; who like myself has his family origins in Asia. Being from an ethnic minority can have its challenges, believe me. Whenever I see positive role-models of Asian Americans, or British Asians I am always pleased because there are so many negative images feed by the media. As a kid growing up in the 1960’s and 1970’s in England things were less enlightened; so I was proud to let my friends know that the lead singer from Queen, Freddie Mercury [Farrokh Bulsara] was actually a British Asian like myself. 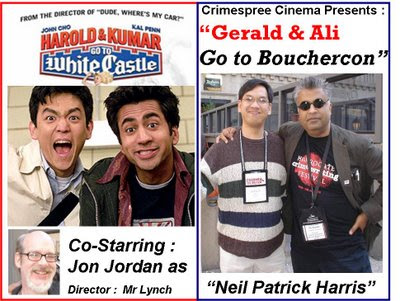 While at Bouchercon, I remarked to Gerald jokingly, that the two of us look like grown-up versions of Harold and Kumar, the two Asian-American stoners who feature in two of the funniest, if somewhat silly movies I’ve seen in recent years. The popularity of the Harold and Kumar movies have helped the careers of Asian-American actors John Cho and Kal Pen; with Cho featuring in the recent J J Abrams’ Star Trek film in the role of Mr Sulu.

If you’ve not seen the two Harold and Kumar Movies I strongly urge you to do so. Despite the silly premise, and the idiotic adventures they find themselves in, there is a serious message about how people from ethnic minorities can be stereotyped by some people. The two stoners first appeared in ‘Harold and Kumar go to White Castle’ [2004], which was re-titled ‘Harold and Kumar get the munchies’ for European release. In truth it is a very silly film, but one that made me laugh so much, I actually felt I was stoned!

The duo returned last year in the very funny ‘Harold and Kumar Escape from Guantanamo Bay’ [2008].

Both Jon Hurwitz and Hayden Schlossberg have announced plans to write and direct a third Harold and Kumar movie, with Greg Shapiro returning as producer, and Kal Penn and John Cho expected to return in their title roles. Though their co-star Neil Patrick Harris may not return as he was shot in the whore-house scene; but we don’t know if he actually died. If the producers are looking for co-stars then look no further than Gerald and Ali and Jon Jordan.


Neil Patrick Harris for Harold and Kumar
So if the poor state of the economy is getting you down, then why not order in a case of beer, get your friends round, and sit back and watch a Harold and Kumar Double Bill on DVD – it just might cheer you up, and make you look at stereotypes in a different light.

The scene below always makes me laugh out loud no matter how many times I’ve seen it, a coda to the Wayne’s World scene when the characters sing along to Freddy Mercury and Queen’s ‘Bohemian Rhapsody’.

And make your plans for Bouchercon 2009 in Indianapolis if you want to meet fellow crime thriller enthusiasts as well as the authors who populate the crime and thriller genre.
Posted by Ali Karim at 2:43 AM