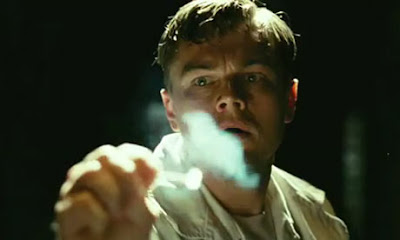 I know I am completely obsessed by Dennis Lehane’s novel sHuTteR iSlAnD as well as the Martin Scorcese film adaptation [and Christian De Metter’s Graphic Novel]. I am glad that despite everyone saying how close the film followed Lehane’s narrative, there was [in my opinion] a major difference – one contained in the very last line that Teddy Daniels / Danny Laedis / Leonardo DiCaprio utters at the conclusion. I’m very glad that it’s not just me that has deliberated the intrinsic significance in those lines added by the screenwriter Laeta Kalogridis.

And for those who didn’t get it -

SPOILER ALERT – PROCEED AT YOUR PERIL

Shutter Island is no impenetrable art-house enigma: it's an old-fashioned noirish thriller that ends with a massive plot twist. As such, you might have thought it would have been easy to understand. In fact, since the film was released in March, the blogosphere's been awash with debate about what actually happens in the final scene.

Martin Scorsese's film is based on a best-selling novel by Dennis Lehane. The book's protagonist, Teddy Daniels, who's apparently a US marshal, turns out to be Andrew Laeddis, a demented killer. He's a patient in a mental hospital who's been encouraged by his psychiatrist to act out his delusion in the hope that this will dispel it. The role play fails: after a brief recovery, Andrew relapses into insanity and is therefore taken off to be lobotomised.

The film's been described as faithful to the book, and many cinemagoers seem to have assumed that it's telling the same story. Leonardo DiCaprio's Teddy does indeed turn out to be Andrew. However, before he falls into the clutches of the lobotomists, he utters a line that isn't in the book. "This place makes me wonder," he asks, "which would be worse – to live as a monster, or to die as a good man?"
For some, this is to be seen as no more than the rambling of a madman. Others, however, take it as meaning that Andrew's only faking his relapse. His unusual treatment's made him aware of the terrible thing he's done: guilt has therefore engulfed him, and he's deliberately getting himself lobotomised to escape it.
These two versions of what the film means could hardly be more at odds. Yet Scorsese hasn't chosen to indicate which is the right one. Nor has DiCaprio. Perhaps the latter isn't sure himself.
He found his role traumatising, and told an interviewer: "I remember saying to Marty, 'I have no idea where I am or what I'm doing.'"

Lehane is credited as one of the film's executive producers, so you might think he at least would know what's going on. Sadly, even he doesn't seem wholly certain: he explains that he stayed out of the scripting process. When pushed, he tries to reconcile DiCaprio's gnomic inquiry with his own original story. "Personally, I think he has a momentary flash," he suggests. "To me that's all it is. It's just one moment of sanity mixed in the midst of all the other delusions."

Cox speaks to Scorsese's psychiatric adviser, Professor James Gilligan of New York University, who gives the backdrop of 1950’s America and the Psychiatric Institutions that sHuTtEr iSlAnD is carved from.

And don’t forget Dennis Lehane is one of the special guests as next years Theakstons Old Peculiar Crime Writing Festival – in 2011 in Harrogate England.
Posted by Ali Karim at 6:09 AM