The Existential Background to Spartan 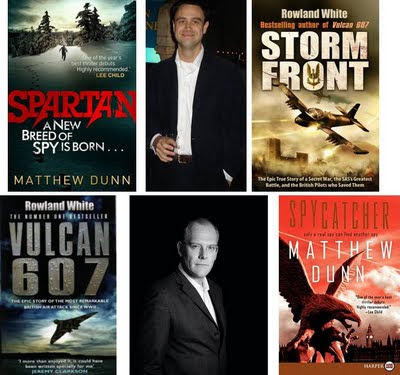 I enjoy thrillers based around the looking glass world of international espionage especially by scribes who have the credentials of authenticity, and writing ability that reflects the existential aspects of the world they portray. The best debut thriller that has passed my reading table this year is without doubt Matthew Dunn’s Spartan [aka Spycatcher in the US], coming from Orion Imprint Swordfish in the UK managed by editor / author Rowland White, and from executive editor David Highfill at HarperCollins US imprint Wm Morrow.

Many know my obsessive nature when a powerful debut captures my mind. I just have to learn more about it, as it enriches the memory of the work, and enhances my own understanding of the dynamics of storytelling. So I was interested in discovering how Rowland White had discovered Matthew Dunn, as well as finding a little about his own writing. The interesting factor is that Rowland followed up his bestselling Vulcan 607 and Phoenix Squadron with newly released Storm Front, a tale that perhaps provides insight into why Spartan / Spycatcher appealed to him, with its tale of the British SAS on a covert mission into the Middle-East -

In early 1970, the Commanding Officer of 22 SAS flew into the strategically critical Sultanate of Oman on a covert intelligence mission. A Communist rebellion in the South threatened not only the stability of the Arabian Peninsula but more importantly the West’s vital oil routes through the Persian Gulf.

Six months later, following a coup d’etat supported by the British Government, the SAS deployed to Oman to lead a fierce, secret war against the rebels. While, from a remote RAF airbase in the desert, an elite band of British pilots, flying difficult, dangerous missions in Strikemaster jets and Vietnam-era Huey helicopters, were scrambled alongside them in support.

For the British soldiers and airmen, it was to be no easy victory. The enemy were well supplied with weaponry and training from China and the Soviet Union, and despite confronting the largest assault force ever deployed by the SAS, many months later the rebels were still fighting back.

And at dawn on July 19th, 1972, a force of nearly 300 heavily armed, well-trained guerillas attacked the little fishing port of Mirbat without warning. Between them and glory stood a team of just nine SAS men. And the skill of the British fighter pilots. The scene was set for an epic encounter. Their heroism would become SAS legend.

Drawing on extensive interviews with participants from the SAS, the RAF and the Sultan’s Armed Forces, most of whom have never spoken about their involvement before, as well as previously classified documents from both the UK and Oman, Storm Front weaves an unputdownable tale of intrigue, action, daring and astounding bravery in the face of overwhelming odds.

So like an SAS man, I tracked the busy Rowland White down and asked him to let me know how he came across this remarkable debut novel -

In launching the Swordfish list I wanted to publish books that appealed for the same reasons as those that inspired me when I was growing up. I loved to lose myself in adventure, danger and exotic locations in the company of naturalists, spies, explorers and soldiers. On my reading list were authors like Willard Price, Herge, Ian Fleming, Paul Brickhill, Wilbur Smith and Clive Cussler. I wanted a Swordfish book to capture readers’ imaginations in the same way and, in Spartan, ex-MI6 field operative, Matthew Dunn’s explosive debut novel, I’ve got one. Agent Luigi Bonomi told me, when making his submission, that Matthew’s book would be up my street and it was quickly clear that his instinct was on the money. When I first tucked into the manuscript I was immediately struck by the Spartan’s distinctive tone. It was hard-edged and muscular, with a confidence and authority that was unusual. I was gripped by its immediacy and sense of purpose.

The book’s hero, MI6/CIA joint asset, Will Cochrane, inhabits a world in which there can be no room for self-doubt or hesitation; where split second decisions have massive repercussions, but where not making a decision is not an option. And it had a ring of authenticity only an ex-intelligence officer could bring to it. It’s pumped up, larger than life and exhilarating. Like Ian Fleming, Matthew’s drawn on his own experience of the secret world to create a hero who, while grounded in reality, operates on the limits of what’s humanly possible. Like all the best adventure thrillers, there’s escapism and wish fulfillment in there. Will Cochrane’s not quite superhuman, but he’s certainly the next best thing. For the reader, the feeling you’re at Will’s shoulder as he conducts his mission is irresistible. Spartan is stunningly dynamic thriller-writing. But alongside kinetic, widescreen action sequences, there’s also tradecraft. There’s excitement, but also insight.


In Will Cochrane, Matthew Dunn’s drawn a hero who I couldn’t wait to go into battle with again. But I’m lucky, as Matthew’s Publisher I get to do that before anyone else. Matthew recently delivered the manuscript for his second thriller, titled Sentinel, it drops us alongside Will Cochrane off the far eastern coast of Russia aboard a rusting trawler as he prepares to infiltrate, alone, unseen, ashore. Reading on, I felt the biting wind and sleet as Will climbed down a rope net towards the churning ocean and I knew I was in for another brutal, bloody and addictive all-action rollercoaster ride. I look forward to many more of them.

Then I managed to interview Matthew Dunn for The Rap Sheet, though he was a naturally a tad coy talking about his time with MI6 / SiS but did provide me this interesting essay on how he became an instrument for Her Majesties Secret Service -

The Route to SIS by Matthew Dunn

The application process to join MI6 is torturous and probably one of the hardest selection procedures in the world in terms of the success to failure rate. It’s designed to be that way for the simple reason that the job of an MI6 field operative is incomparably tough and mentally challenging. Applicants have to sit numerous timed cognitive tests which get increasingly harder to the point of absurdity, have to lead role-play problem-solving exercises, are interviewed extensively, and have to undergo an incredibly intrusive security vetting investigation that lays bare every aspect of your private life. Potential recruits can fail at any stage but it is in the interviews that the real work is done to establish whether you have what it takes to become a spy.

The interviewers are senior intelligence officers who are trained to spot indecisiveness, mental inferiority, frauds, fantasists, and potential traitors. Anyone with those and other weaknesses are quickly toyed with and spat out of the system. If you avoid that, the interviewers will focus on your strengths to see if they are up to the exacting standards required of an MI6 officer. One of the questions they ask is, “Who do you look up to?” If you answer something like, “JFK and Gandhi” then the interview is over. If you answer, “Nobody” it continues. The reason for this is that if you look up to someone, then you perceive yourself to be beneath that person in some way. MI6 does not want people like that. It wants people who have the absolute conviction of a supreme leader.

That’s not to say that MI6 looks for arrogance in its recruits. Successful applicants never display an overbearing sense of self-worth and self-importance, or contempt for the weak. The job of the spy often requires you to interact with individuals who are vulnerable and those people need compassion and leadership from the field officer. Moreover, MI6 operatives will sacrifice their worth and status in a shot if it means getting the job done. They are patriotic and totally dedicated to their missions. Arrogant people put themselves first; MI6 officers do not.

However, a self-belief that you can do things that others cannot is vital. MI6 spies are given extensive and ongoing training in highly specialized use of guns, military unarmed combat, explosives and other aggressive tradecraft actions. But in the field, the most vital weapon of a spy if his or her mind. MI6 officers can move through hostile environments with the confidence and precision of an ultimate predator. People don’t see them, or if they do they think they are seeing something else. The mind of a spy can take that person into places and situations that most would think impossible to access. And very often that’s done without the deployment of a weapon.

Many people have a natural inclination toward subservience to people they believe to be more experienced than them, but MI6 officers are different. You could be a twenty five year old female MI6 field operative who is running a sixty year old male general. The agent might have led thousands of men into war, but you would be his leader and he would expect that of you because his life is in your hands and you are the expert in intelligence matters. If you display anything other than absolute strength and a command of the situation, then your agent will rightly wonder if he is going to die.

The tiny number of applicants who make it through the selection process to join MI6 have an even tougher mountain to climb once they’re within its ranks. They have to get through a rigorous pass or fail training course, are on probation for two years during which time they can be dismissed, and even after that they must prove their worth in every day of employment as a spy. A field officer who cannot operate at one hundred percent of what is expected of them will not be deployed on a mission because, if he was, at best that mission could fail and at worst the officer and others around him could be killed.

But very few MI6 missions do fail, because MI6 recruits the right kind of people. They are a very rare breed of animal. They are the best intelligence operatives in the world.