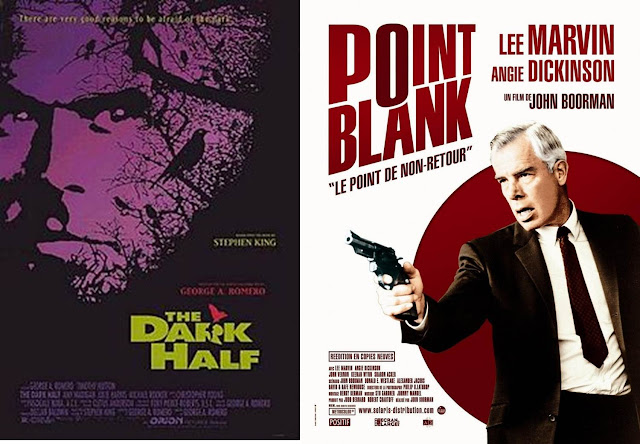 Doppelgänger from the German [literally "double-goer"] is a look-alike or double of a living person, sometimes portrayed as a paranormal phenomenon, and is usually seen as a harbinger of bad luck.
Ever since I witnessed some mysterious and frightening incidents as a child; something I still cannot explain, something that I still think of from time to time – the role of the Doppelgänger has always fascinated me, as well as acting as a warning to me, about personality, and the dangers of existence.

Like many writers, I use pen names and enjoy traversing the edges of personality, be it my own or that of others. The reasoning is that most people are not who they present themselves as; for we have facets of character that remain hidden - often to survive.
As the 1980s were closing Stephen King's pen name Richard Bachman was exposed as he battled the last stages of his alcohol and pharmaceutical misuse. 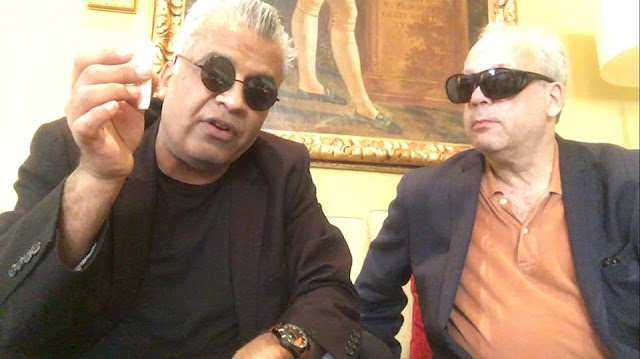 The novel THE DARK HALF is from that time though rarely mentioned; with its surreal story of Author Thad Beaumont a writer of literary fiction battling his Pen Name George Stark's creation the disfigured and dangerously malevolent Alexis Machine. George Stark wrote two ultra-violent and renowned pulp thrillers MACHINE'S WAY and STEEL MACHINE that were far more popular commercially than Thad Beaumont’s literary output.
This underrated King novel THE DARK HALF is a thinly disguised homage to Donald Westlake and it would be filmed later by George A Romero starring Timothy Hutton.
I recall King’s THE DARK HALF because like Donald Westlake, some of us have a little Richard Stark in us, to help traverse the dangers in this world; but like Nietzsche's abyss, when the inner Parker is revealed to others, the abyss that is Parker looks back into you. The dark side of human nature is an evolutionary necessity; but also a danger - one we keep locked away.
“The office women looked at him and shivered. They knew he was a bastard; his big hands were born to slap with, they knew his face would never break into a smile when he looked at a woman. They knew what he was, they thanked God for their husbands, and still they shivered. Because they knew how he would fall on a woman in the night. Like a tree".” ― Richard Stark, The Hunter
Here's a few words I wrote for Jeff Pierce's THE RAP SHEET when Quercus Publishing brought back Parker to the UK in 2007. Jeff featured a staggering outpouring in 2009 when Donald Westlake passed away, and here's some thoughts from the Crime / Thriller Community from The Rap Sheet Part One and Part Two
I wrote at the time in 2009 when hearing of the passing of Donald Westlake -
"I first discovered Donald Westlake thanks to the movie version of The Hot Rock with Robert Redford, which led me to explore more of the Dortmunder books, as well as muttering “Afghanistan, Bananistan” to strangers from time to time. But my true love was the Richard Stark series featuring Parker. I loved the spartan style of Stark, and was overjoyed when I read Stephen King’s tribute to Stark in his brilliant novel about split personalities, The Dark Half. (“Anyway, for reasons you’d have to ask Westlake about, he eventually stopped writing novels about Parker, but I never forgot something Westlake said after the pen name was blown. He said he wrote books on sunny days and Stark took over on the rainy ones ...”) It was an apt tribute to a great man.
I only met Westlake once when we came to the CrimeScene convention in London in 2005. I was humbled in his presence, despite his modesty and gentle nature. I find it surreal that when I heard of the awful news [of Westlake’s death], the first words that came into my head were “Afghanistan, Bananistan,” which echoed as a lament for our loss. I miss his words already, as the world just darkened a tad, knowing that he is no longer with us.
Watch Detectives Beyond Borders Peter Rozovsky and I discuss Donald Westlake and Richard Stark in an amusing and unscripted post-Crimefest 2017 Sunday afternoon.

In memory of the late Donald Westlake and Darwyn Cooke