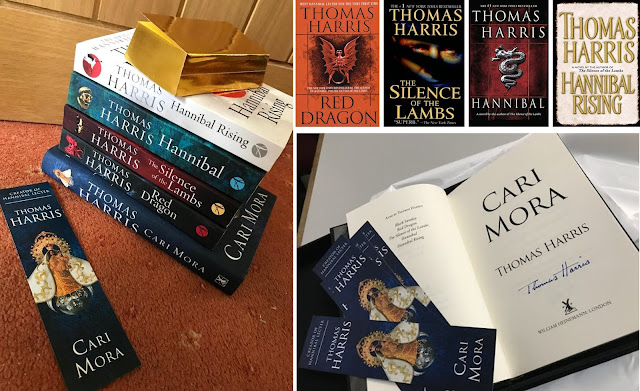 I was admiring my new set of backlist Thomas Harris novels, featuring Dr Hannibal Lecter, just re-issued with stunning Artwork from the Arrow paperback Imprint of PenguinRandomHouse to coincide with the release in Hardcover of Thomas Harris’ sixth novel, Cari Mora. 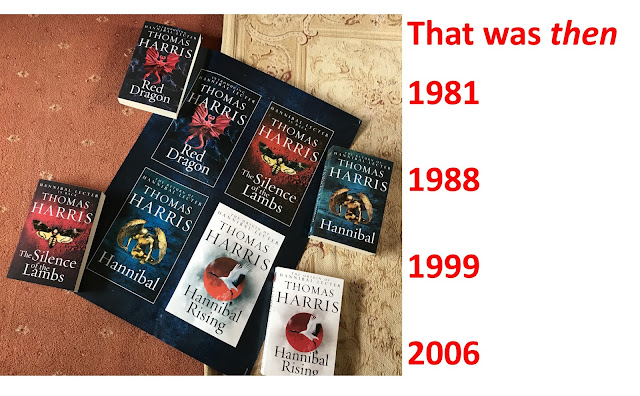 I thought also of conversations with my Father, who was always amused at my interest in this character, the deranged psychiatrist from Johns Hopkins Baltimore. Though now retired, my Father was a former psychiatrist – hence his amusement.

I have been having a rather surreal time lately. Firstly, after weeks of sitting on my hands, thanks to Charlotte Bush of PenguinRandomHouse who kindly allowed me [and a few others] an early read [coupled to a non-disclosure agreement]. 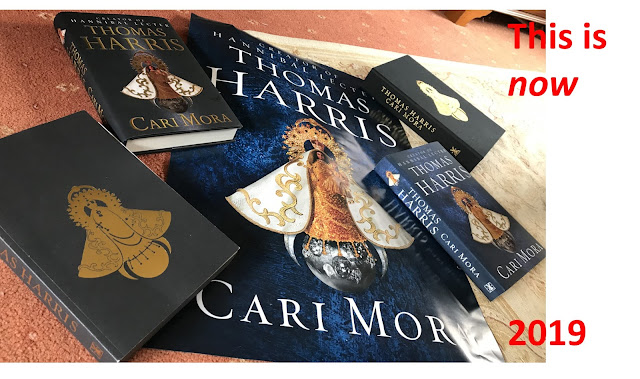 Prior to release my anticipation was visible HERE, HERE and HERE.

Due to the enforced silence until I could publicly review Thomas Harris’ new book last week, I have become rather vocal, as to my sheer joy at the new novel. Some may consider that I have going a tad mental, a tad all Stieg Larsson and perhaps I have, as my enthusiasm for Thomas Harris’ narrative skills knows no perimeter. 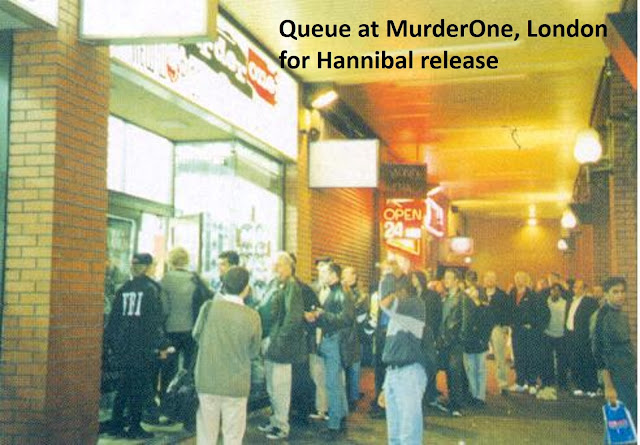 They say anyone who was alive on 22nd November 1963, the day John F Kennedy was murdered in Dallas, remembers what they were doing and where they were at that moment, when those shots were fired.

As nutty as it may sound, I know where I was, who I was and the context of my life when a new novel by Thomas Harris was released; apart from 1975’s Black Sunday, which missed my radar at that time. I was twelve and clawing my way through Ian Fleming, Alistair Maclean, Adam Hall, Desmond Bagley, Hammond Innes, Eric Ambler and all those myriad British Thrillers that The Talented Mr Mike Ripley so amusingly and informatively recounted in his book KISS KISS BANG BANG, now available as a paperback, with more info HERE

I was a clueless 17-year-old kid in 1981 buying RED DRAGON by Thomas Harris in Hardcover purely on Stephen King’s recommendation, from of all places the SPCK, Chester [surreally a Christian Book-group]. Immediately after reading it three times back-to-back, I tracked down BLACK SUNDAY by Thomas Harris, a paperback edition, a film-tie from Earl’s Eye Books, a second-hand bookstall in Chester market I frequented and traded books in my youth. I enjoyed Black Sunday, though it was a workman-like thriller, but as a debut it was a portent for what would follow. It dates back from the days when Harris and two colleagues worked as journalists for The Associated Press. Rumour has it that the advance was split three ways, but it was Thomas Harris who actually did the writing as well as the typing for the novel. It was the film option that allowed Thomas Harris to escape Journalism.

I was aged 25, a marine chemicals surveyor in 1988. At London Heathrow I screamed, spotting an ‘early / advance’ copy of THE SILENCE OF THE LAMBS by Thomas Harris in the airport bookstore. It was my second trip to the Arabian Gulf (for a six-week tour of duty). That novel made the flight to the Middle East so memorable, as well as that six-week tour of duty, where I read the novel four times [back-to-back]. The last time I recall finishing it; I was resting on the deck of a Chemical Tanker berthed on a jetty in the Arabian Gulf. As dawn broke I watched the Sun emerge from the horizon, just as Starling read the letter from Dr Lecter about Orion, which closed the novel. 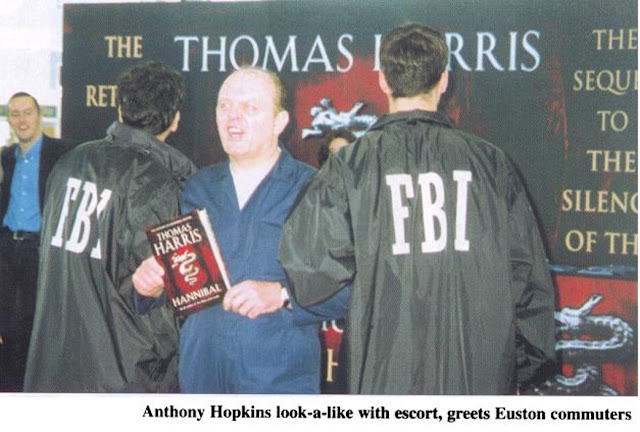 Just before the Millennium, I was 36 and working for a German Chemical Engineering company. I queued at Maxim Jakubowski’s MurderOne in Charing Cross, London on 7-8th June 1999, with a hotel Room Booked, and a bottle of Amarone waiting for HANNIBAL by Thomas Harris. I was the first in the queue, for this book.

In 2006, I was 43 and under a huge burden setting up a complex business that was in its infancy. I recall those difficult years. My readings of HANNIBAL RISING by Thomas Harris helped me cope with the adverse camber of setting up a business, and watching it so very closely, because a business is like a flower, it can be crushed or wilt without close, close management especially in those early days.

In 2008, I contributed to an academic book, “Dissecting Hannibal Lecter, a collection of essays on the novels of Thomas Harris”, edited by Benjamin Szumskyj and published by McFarland Press. 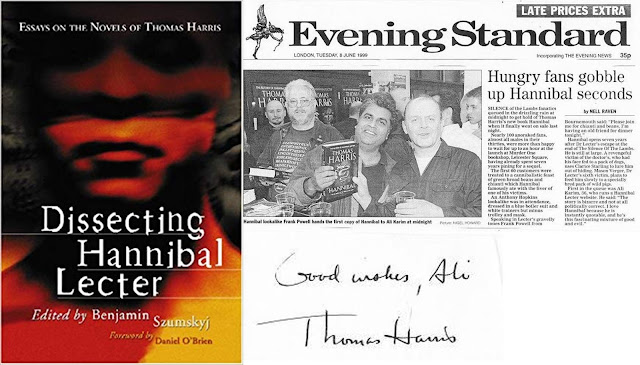 During Crimefest 2010, I was one of four competing in the Criminal Mastermind, and chose The Novels of Thomas Harris as my specialist topic – giving me a valid excuse to re-read the five [at the time] novels by the author, Click Here to see what happened. Martin Edwards unsurprisingly won [again] with Peter Guttridge and I joint runners-up and poor Cara Black was in the rear, as her specialist topic ‘French Crime Novels’ was far too broad a church.

In 2013, I helped Barry Forshaw [with a little background material] for his excellent book on THE SILENCE OF THE LAMBS, part of the Devil’s Advocate series, which coincided with the release of the 25th Anniversary edition of that extraordinary book from Thomas Harris – CLICK HERE for more information. 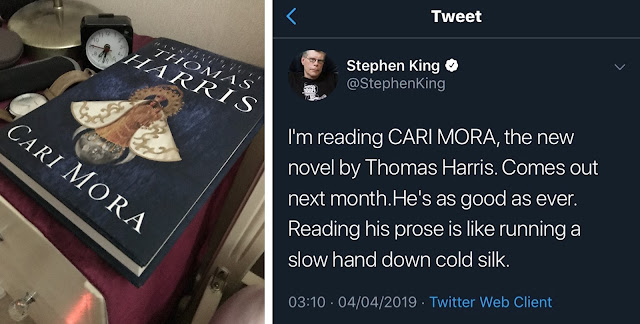 In 2019, I will turn 56, and Thomas Harris has published his 6th novel entitled CARI MORA. I was very fortunate to have an early reading, though having to sign a legal agreement not to publish a review until after Midnight on Thursday 16th 2019, the day of its release in the UK and Ireland by  William Heinemann - one of the oldest and most respected publishing imprints in Great Britain, part of the PenguinRandomHouse conglomerate. 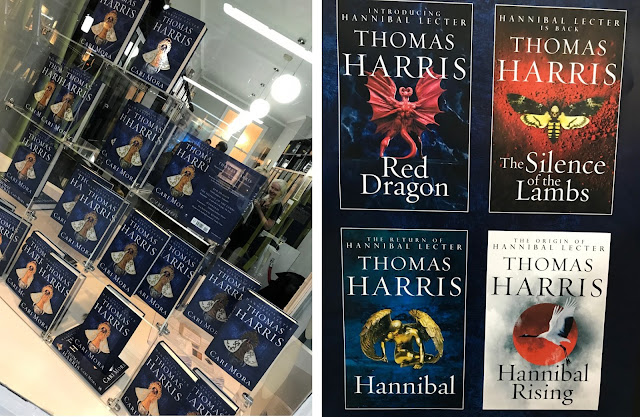 I have been reading varying commentary about Cari Mora; much revolving around comparisons to 1981's RED DRAGON and 1988's THE SILENCE OF THE LAMBS, [though little mention is made of 1999's HANNIBAL or 2006's HANNIBAL RISING]; Perhaps, the first two novels to feature Dr Hannibal Lecter remain at the summit of the Crime / Horror Genre in the opinion of many, including my own - so it is natural to compare. 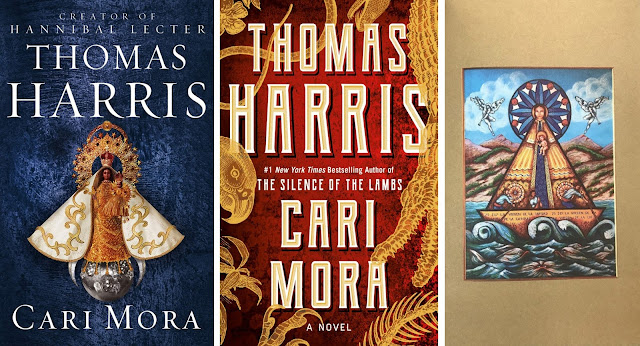 Particularly interesting are commentary from Barry Forshaw in the FT, John Connolly in the Irish Times, as well as from Marcel Berlins and John Dugdale in Saturday’s THE TIMES and THE SUNDAY TIMES [respectively]

Though I have affection for Hannibal and Hannibal Rising but not to deride or compare them to the two novels that preceded them. Like a parent we love our children, each for different reasons, rationalizations.

I sometimes quote Francis Dolarhyde [from Thomas Harris’ RED DRAGON] who sent a letter to Freddy Lounds of The National Tatler, signing it as 'Avid Fan'. When it comes to the writings of Thomas Harris, that term Avid Fan does makes me smile.

Though I have issues with his debut, BLACK SUNDAY, a workman-like thriller, and a good calling card, while he worked with two others at the Associated Press, the film option being his way to exit journalism.

And I stand resolute in my admiration of his 6th Novel, the weird and terrifying CARI MORA, and as a caveat, would say, with regard to RED DRAGON and THE SILENCE OF THE LAMBS - "that was then", and as for CARI MORA, "this is now".

For those who write vivid and thought-provoking prose drawn from the darkest wells of the imagination, and find interest in ‘The Weird’ - will find resonance in these words from Harris.

“You must understand that when you are writing a novel you are not making anything up. It's all there and you just have to find it.”

CARI MORA is written by a person who takes his craft, writing prose, exceedingly seriously, and his 6th novel is a very different book, to those that preceded it.

The bottom line, for me is that I loved it so very, very dearly and still do, applauding the authors audacity so hard, that my palms became red, but they have now turned crimson.

But you make up your own mind, but remember the dark excesses it contains, the black humour is in terms of its narrative artistry, because the 'beauty' or 'horror' always resides in the eye of the beholder.

“The exposition of Atrocious Torture Instruments could not fail to appeal to a connoisseur of the worst in mankind. But the essence of the worst, the true asafoetida of the human spirit, is not found in the Iron Maiden or the whetted edge; Elemental Ugliness is found in the faces of the crowd.”
Thomas Harris, Hannibal [1999]

And what can this novel CARI MORA signal about our own natures?

For little has changed from when we resided in caves, to the draw of the coliseum back at the times of gladiatorial games in Rome, to watching John Wick 3 today.

One thing I can state, is that despite your opinion, Thomas Harris' writing ability is in mine - extraordinary, and at times so very scary, as he holds a mirror to our faces, and our inner fears and worries.

For a rare and insightful interview with Thomas Harris, Click HERE for the recent New York Times feature.

Footnotes
If you’ve never read Thomas Harris’ THE SILENCE OF THE LAMBS, RED DRAGON, HANNIBAL, or HANNIBAL RISING then the new paperbacks from Arrow, [PenguinRandomHouse] with the beautiful new covers, are a great place to start, scroll to the bottom of THIS LINK for more information on securing them.

And more information from Publisher Jason Arthur of William Heinemann recorded HERE and embedded below in a six-minute clip filmed in angular gonzo-vision, of the launch last week at Goldsboro Books London >

Part of the launch included details of a nationwide Treasure Hunt, for Gold Bullion, mirroring the narrative of Cari Mora – the prize being a unique ‘Gold’ Edition of the Thomas Harris novel – details from The Bookseller HERE

And finally I highly recommend the audio narrated versions by Thomas Harris from Audible, with RED DRAGON, THE SILENCE OF THE LAMBS, and HANNIBAL being abridgments, while HANNIBAL RISING and CARI MORA are Unabridged. Because of the gothic nature of these books, Thomas Harris US Southern Accent, and his talent to act the roles makes them a unique experience, one that decorates your mind. 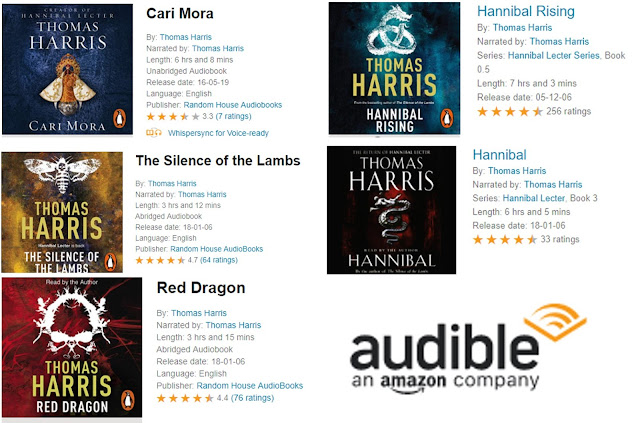