US vs. UK Thriller War 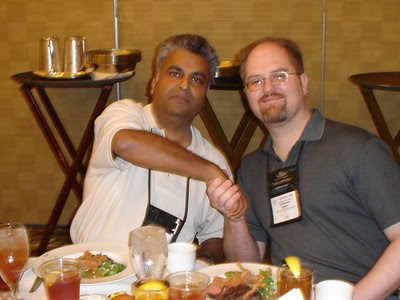 As an [associate] member of International Thriller Writers [ITW]; and judge for the ITW [2006, 2007 and reserve for 2008]; like my American colleague, the renowned critic David J Montgomery we have occasionally pondered upon the differences between American and British Thriller novels over beers. I’ve never considered either nation superior to the other in terms of thriller writing, but rather enjoyed the diversity and popularity the thriller genre enjoys.

At least two Thriller Critics [Photo from Thrillerfest 2006 Pheonix, Arizona] - David J Montgomery [US] and Ali Karim [UK] are available for a peace accord, as long as beer is provided.

As a renowned ‘Thriller enthusiast - I was asked to contribute an essay for the ITW ‘100 Best Thriller Novels’ book organised by David Morrell and Hank Wagner as well as writing extensively about Thriller Novels and Espionage Fiction for Barry Forshaw’s Greenwood Encyclopaedia of British Crime Fiction – So while taking a break at yesterday’s opening of The London Book Fair, I noticed a rather odd article in The Bookseller about a trio of British Thriller Writers who founded ‘The Curzon Group’ attacking American Thriller Novels –

Battle lines are being drawn across the Atlantic with the launch of a group designed to “end the reign of the production-line American thriller writers” and return the focus to domestic British authors. Authors Matt Lynn, Martin Baker and Alan Clements, who are respectively published by Headline, Pan Macmillan and Mainstream, are the founder members of the Curzon Group.

Jeffrey Archer will be advising the trio. Curzon’s manifesto specifically attacks American thriller writers—James Patterson, John Grisham and Dan Brown are all in the firing line. The group hopes to spark a debate, through TV chat shows, radio and national news media, about the "fantastic position" British thriller writing had in the past but which has declined in the past decade.

Lynn said: "Too many of the American thrillers are just being churned out to a rigid formula. The great British thrillers of the past had a quirkiness to them, an originality, and a passion for storytelling and writing that is absent from the market right now. All the writers in this group believe in bringing that back."

Archer said: "These were some of the greatest storytellers in the world. The flame has to be kept burning by a new generation."

The trio will draw on the tradition of writers such as The 39 Steps author John Buchan, Alistair MacLean, who wrote The Guns of Navarone, and the man responsible for the James Bond franchise, Ian Fleming, "reviving them for the 21st century".

Read More from The Bookseller

There has always been the old chestnuts of ‘What is a Thriller?’ as well as the ‘Why are Thrillers dominated by Male Writers?’ and now we have this new chestnut. Now healthy debate is useful in promoting literacy as long as it doesn’t get divisive.

From Wilkie Collins to John Buchan, Eric Ambler to Hammond Innes, Ian Fleming to Alistair MacLean, and from Len Deighton to Frederick Forsyth, the British thriller is one of the richest traditions in world literature.

But in the last decade the British thriller has fallen into a sad decline. The market has been colonised by production line American thriller writers.

The Curzon Group is dedicated to reviving the traditions of Buchan, Fleming, MacLean and Forsyth, bringing the British thriller bursting back to life in the twenty-first century.

Read More from The Curzon Group

The cynical side of my nature considers this venture by ‘The Curzon Group’ as a method of promoting their own work; work which I am unfamiliar with. Personally speaking; the Thriller novel is split into many subgenres; and this UK vs. US debate from ‘The Curzon Group’ is a tad too jingoistic for my taste. Diversity is everything.

Incidentally Readers Digest have an interesting article on what they consider are the best of these thriller sub-genres Here and Here. The listing features both British as well as American landmarks of the Thriller Genre. The problem is where does British Born, American thriller writer Lee Child fit?

More Debate from Sarah Weinman here
Posted by Ali Karim at 3:30 AM