A Big Hand to Henriksson & Forsyth 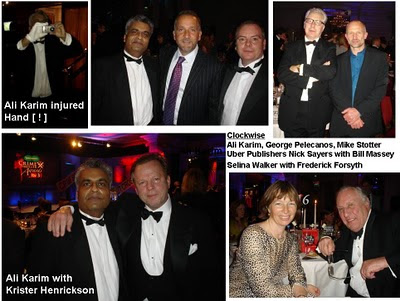 Despite my badly injuring my right hand this week, [hence the bandages and white protective glove]; I thoroughly enjoyed the Specsavers CWA Dagger Awards in London on Friday. Due to my hand injury, I can only type rather slowly hence a very short piece about the event.

As a true fan-boy there were too many people there to comment and write about, however I must admit that my first ever meetings with Frederick Forsyth and Swedish actor Krister Henriksson, who plays Inspector Kurt Wallander were memorable, truly memorable. I somehow managed to remain coherent despite my inner fanboy tendencies. I did discover that Henriksson is good friends with author Henning Mankell. I also had a fascinating chat with Fredrick Forsyth. I later learned from Forsyth’s publisher Selina Walker of Transworld that when Forsyth’s debut 'The Day of The Jackal' was submitted for publication, it was rejected by all and sundry, apart from one publisher. This publisher decided to take a gamble as he liked the book, but commented it broke the 3 golden rules of thrillers [at that time] so he decided, ‘let’s take a punt’ –

# The writing style was totally ‘different’ to thrillers of that time; filled with a style that was excessively descriptive and very ‘matter of fact’.

# The novel was based around true life events, and everyone knew that the Jackal failed in the assassination attempt, hence the climax already known.

The rest, Selina Walker said ‘was history’. I admire people who take risks.

I also admire Frederick Forsyth, as when we had a chat about his work, especially his short stories from his collection No Comebacks which I read while at University; he was interested in one of his stories that still resonates in me for obvious reasons –

There Are No Snakes In Ireland is about an Indian medical student in Ireland who is bullied by the foreman at a construction site where he is trying to earn his tuition. Things go too far and the student decides to take his revenge.

There was some drama, very late in the bar, when I attempted to help Krister Henriksson try and find his CWA Dagger that he mislaid in his goodie bag. I thought ‘surreal!’; me helping Inspector Kurt Wallander on a case. When I told my wife, she rolled her eyes to heaven and said, “You do realize that he’s an actor and not really a policeman….”

There were so many key figures from the Crime and Mystery genre, to list them all would be too hard with just one hand, though special thanks go to my Editor at Shots, Mike Stotter - a true friend who helped me with my bandages.

Now I have to look after my damaged hand, for my trip to Bouchercon next week; so if you trap me in the bar, I’ll tell you more - as typing with one hand is proving a nightmare, but I do like to talk a lot about the genre!

Also - I must thank Dan Wagner for his kind words about the Book Reviewing panel that happens on Thursday, and of course check out The Rap Sheet for details on the Friday Panel entitled Inferno, and see you all next week in San Francisco!
Posted by Ali Karim at 7:16 AM