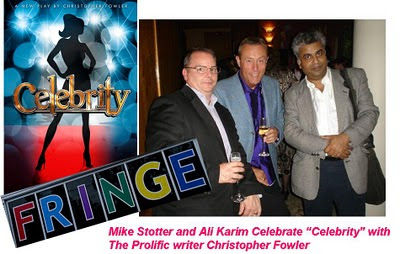 I know many of you enjoy the work of Christopher Fowler as much as I do. I am always amazed at his prolific work ethic, with novels, short stories, anthology editing, films, and reviewing, well it looks now he’s branching out onto the stage.

For those who haven’t sampled his work - Fowler won the British Fantasy Society [BFS] Best Short Story Of The Year 1998, for Wageslaves. In 2004, The Water Room was nominated for the CWA People’s Choice Award, Full Dark House won the BFS August Derleth Novel Of The Year Award 2004, and American Waitress won the BFS Best Short Story Of The Year 2004. His novella Breathe won BFS Best Novella 2005. His short story The Master Builder became a CBS movie starring Tippi Hedren and Marg Helgenberger entitled Through The Eyes Of A Killer, while Left Hand Drive, won Best British Short Film of 1993.

His fiction details urban decay, and is usually classed as horror, or [dark] general fiction with some science fiction / fantasy elements. Fowler's first four novels set his backdrop of London as the source of his storytelling. He debuted in 1988 with the novel Roofworld, which details a story of rival gangs who live on the rooftops of London, fighting arcane battles while the city sleeps. His second novel, Rune, tells the tale of a disparate group of Londoners who band together to prevent the devil's return to earth via modern technology. Red Bride chronicles a modern marriage made hell by a couple who cannot trust each other - even though their lives finally come to depend on it. While Darkest Day is the story of the occult which was later re-worked in his ongoing Bryant and May Detective series.

‘Celebrity’ is part of the London Fringe Festival

Synopsis:
Once there were stars. Now everyone wants to be a celebrity - how did we get from Cary Grant to Jedward?

It’s 1968. Helena runs Albion PR in London’s Wardour Street, looking after ‘difficult’ stars. She hires 19 year-old Billy to teach him the secrets of the business. Saving the reputations of her clients involves an outrageous amount of lying and cheating, but neither Helena nor Billy realize this innocent era is about to come crashing to an end…

‘Celebrity’ is based on the life of a real London PR agent. Only the names of scandal-struck celebrities will be changed to protect us from libel!

I admire Fowler, as I really enjoyed his memoir about growing up with books in ‘The Paperboy’, though I wonder what Bryant and May would think about his new venture in the West End….
Posted by Ali Karim at 9:07 AM