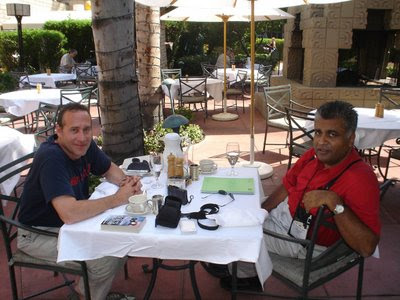 On occasion my kids laugh when I put down a book and start clapping. They smirk and say “Don’t tell us Dad. Best book you ever read!” In the case of Joe Finder’s Paranoia, they are close indeed.

Anyway, on today’s Patti Abbott forgotten book Friday – I nominate ‘Paranoia’ by Joe Finder; not exactly a forgotten book, but a novel that I consider to be one of the best times I've had reading a novel. When I finished, I didn’t just clap, I gave Finder and his hero Adam Cassidy a standing ovation.

I have been fortunate to have bumped into Finder many times over my surreal travels through reality and fiction. I was worried when I first met Finder, in case he turned out to be weird; but when we met [at the inaugural Thrillerfest in Phoenix, Arizona in 2006], my fears were totally false. We had breakfast and I found Finder a delight [Photograph (c) 2006 A Karim]. What I discovered over scrambled eggs and coffee is that Joe Finder is highly intelligent, modest, well read and a mine of information about writing, politics, the human condition and thriller fiction.

A little background - Joe Finder tends to write what I term ‘High Concept’ – which his breakout novel Paranoia [2004] was. In fact Paranoia I rate as one of my all time best techno-thrillers – period. Joe’s subsequent works such as 2005’s Company Man [UK Title ‘No Hiding Place’], the ITW award winning Killer Instinct [2006] and Powerplay [2007] are equally remarkable work. In fact Joe’s early work such as Zero Hour [1996], and High Crimes [1998] which was filmed with Ashley Judd and Morgan Freeman, Extraordinary Powers [1994] and his recently re-issued 1991 thriller Moscow Club are all well worth re-discovering. Last time Joe was in London, he talked about these novels over lunch and he even had an amusing anecdote about meeting Oscar winner Morgan Freeman on the film set.

Since then he moved from Orion to Headline in the UK with his last novel ‘Power Play’ and I was worried why we hadn’t seen any new work from him but I was relieved when I was assured that a book is on the way as reported at Rap Sheet.

When I read the first chapter and came to the last line ‘My life as I knew it was over’ – I knew as a book reviewer that this was going to be a thrilling book, but why? Because of the hip, perceptive and slippery style of the prose and a plot to die for. When I got to the end, I put the book down and clapped my hands and shouted ‘Bravo!’ and would implore you to seek out ‘Paranoia’ as it is such a fun read.

The story revolves around white-collar, junior manager and corporate slacker Adam Cassidy who throws a party for one of his blue-collar colleagues using funds from his employer Wyatt Telecom. The budget for the party reaches $68,000 and lands him in deep trouble. A Faustian pact is offered by the man at the top of the tree, Nicolas Wyatt, who Cassidy describes as ‘one scary dude’. The deal is outlined explicitly as either going to jail (for the theft of the $68,000) and facing anal rape night after night (as Cassidy is a pretty boy), or to go undercover and infiltrate Wyatt’s main competitor Trion systems on an enhanced salary. Nursing his critically-ill father and paying for his medical costs, Cassidy realizes his back is well and truly to the wall so he agrees to become an industrial espionage agent. Researched heavily, the high-tech environment is vividly realized, as Cassidy gets trained into becoming a top-flight executive. The book is very perceptive and underlying the hip humor is a layer of cynicism. I loved the line ‘Power corrupts and PowerPoint corrupts absolutely’, and the book is peppered with such corporate snipes.

After grueling training and coaching, Cassidy enters Trion Systems, and becomes pressurized by Wyatt to extract information on a new product (a product so secret that it is hidden from Trion’s main business). He also has to cut his ties to his slacker buddies as he transforms himself into the high-powered executive. The stakes get higher as does Cassidy’s paranoia, because he soon finds himself heavily embroiled within the politics of Trion, but also realizes that things are not as they once seemed. His woes are heightened when his father needs constant nursing, as his emphysema brought on by his cigarette habit requires constant nursing. The problem is that none of his stream of nurses can cope with his acidic tongue.

As Cassidy infiltrates Trion, he soon finds a friendship with Alana Jennings an employee working on the secret project, and starts questioning his allegiances. The pressure from Wyatt is ratcheted up and Cassidy finds himself a pawn in a bigger game.

I defy anyone not to read this in one sitting; such is the easygoing and hip prose style of Finder. However it is the unbearable tension that starts bending back the plot like a catapult that really makes this one hell of a book.

Exciting, fast-paced and laced with intelligent humour – this is a fun read and one of the best techno-thrillers for sheer thrills – Ali Karim

If you’ve not read Joe Finder’s “Paranoia”, you have a serious gap in your thriller bookshelf which you need to fill; but don’t just take my word – here’s more, and more and here’s Joe talking about it below