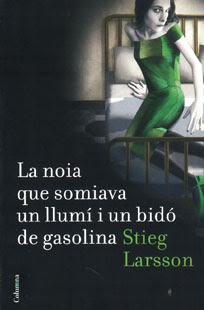 The so-called Millennium trilogy, completed before Larsson succumbed to a heart attack in 2004 at the age of 50, has sold more than 10 million copies worldwide since 2005. The rights to the books, “The Girl With the Dragon Tattoo,” “The Girl Who Played With Fire” and “The Girl Who Kicked the Hornets Nest,” have been sold to 40 countries and are bestsellers in Germany, the U.K. and the U.S.

Mankell still holds the crown as Sweden’s most read crime writer, with his 10 books about the disheveled police officer selling more than 30 million copies globally. They have also sparked a tourism boom in Ystad, which has a population of 17,000. Wallander fans flock to the town to take in the settings of the books.

The local tourism office has a special “Wallander Package,” offering lodging at one of the hotels featured in the books as well as coffee and dinners at the cafes and restaurants favored by Wallander. Wallander movies shot in the region helped push up tourism revenue by a third in recent years, while the number of daily visitors soared 29 percent to 1.45 million, according to municipality figures.

Interest in the town peaked after the British Broadcasting Corp. filmed three English-language versions of Mankell’s books there last year, with about 18 million viewers tuning in to watch Branagh as Wallander.

“The marketing we get is invaluable,” said Marie Holmstroem, spokeswoman for the Ystad Tourism Office. “The industry is booming, companies have been established here because of the filming of the books, and more companies are also coming here to shoot their films.”

The Larsson movie, featuring Swedish actor Michael Nyqvist in the lead role of reporter Mikael Blomkvist, has almost sold out at the box office. The distribution rights to the film and the two planned television series have been bought by France, Italy and Denmark. The total cost of producing the Larsson movie and 6 television episodes is about 110 million kronor ($11.3 million), according to production company Nordisk Film.

In the first of Larsson’s books, Blomkvist is hired by industry magnate Henrik Vanger to spend a year at the Vanger island and investigate the unsolved disappearance of a girl 40 years ago. In the process, he meets Lisbeth Salander, a data hacker with a troubled history and a dark mind. The Millennium trilogy follows the pair as they face Salander’s past in the coming two books.

Read the full piece from Bloomberg Here
Posted by Ali Karim at 10:15 AM