The Making of Mankell 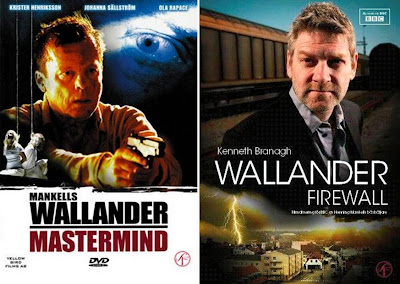 I look forward to meeting Swedish actor Krister Henriksson on Friday at the CWA Specsavers Dagger Awards in London, where he is nominated for an award for his portrayal of melancholic detective Kurt Wallander. I see that the BBC Series featuring Kenneth Branagh as the depressively troubled inspector has its second series currently airing on US TV. Personally I prefer the original Swedish version from YellowBird Productons featuring Henriksson.

Meanwhile The Independent has a lengthy feature with Geoffrey Macnab including an interview with Henning Mankell, the creator of Kurt Wallander –

Speaking from Sweden, where he has been attending the Gothenburg Book Fair, Mankell ponders the reasons for the extraordinary global popularity of Nordic detectives. "Naturally, I've been thinking about it," he tells me. "One [reason] must be pure coincidence. The second is that I guess I worked as a locomotive in some ways. My success has been an inspiration for others. You remember the tennis player Björn Borg? Before that, Sweden had very few good tennis players. After that, we suddenly had a hell of a lot. Maybe that is one kind of explanation."

The main subject of my interview isn't Larsson or Björn Borg. Nor is it the psychology and unlikely appeal of the morose Detective Kurt Wallander. It is Mankell's ongoing attempts to make an ambitious TV drama and feature film about his father-in-law, Ingmar Bergman – a project interrupted in surreal fashion by the Israeli army.

Earlier this summer, Mankell was aboard the Gaza-bound aid flotilla that was attacked by Israeli forces. To his consternation, part of the screenplay for his new film about Bergman was confiscated by the Israeli soldiers.

"Whatever I do, I am always working on something," says Mankell, explaining how he happened to have the Bergman screenplay in his possession at the same time as he was taking part in a mission to bring aid supplies to Gaza in defiance of the Israeli blockade. "When everything was stolen and confiscated, they [the Israeli troops] also took the manuscript," he recalls. "What the hell are they supposed to do with that?"

Four months later, the Israelis still haven't returned Mankell's screenplay. He jokes that the Israelis must have thought the screenplay – called Crisis in deference to Bergman's directorial debut – was written in code. Mankell very much doubts that the young commando soldiers who took the screenplay even knew who Bergman was.

Mankell, now 62, has spent many years living and working in Africa. In the 1960s and 1970s, he was a political activist, campaigning against apartheid in South Africa and the US war in Vietnam. Being aboard the Gaza flotilla didn't scare him at all. "I am not an afraid person," he blithely states. "In all the years I have lived in Africa, I have had some quite terrible experiences. What I still think about today is how very stupidly they [the Israeli army] behaved. If they really had had the ambition just to stop the flotilla, they should have done something with the rudder and propellers," he reflects on the incident, which left nine flotilla members dead, saw him arrested and provoked a huge international row.

The crime writer's outspoken opinions about the Middle East have been well chronicled. He likens the plight of the Palestinians to that of black South Africans in the apartheid era and expresses his confidence that the Gaza blockade will eventually be broken. He has no intention of letting up on his activism. "I am a very dangerous man because I know that we managed to crush the apartheid system in South Africa without violence. This is also the idea here. Sooner or later, people in Israel must understand that this is an unbearable situation."

Read the full feature here
Posted by Ali Karim at 10:10 AM