Answering one of life’s big questions 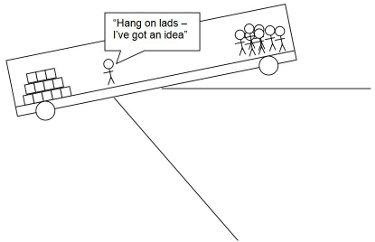 One aspect of life that has troubled me since a child has been, what the hell happened to Charlie Croker and his criminal cabal at the end of the 1969 caper movie “The Italian Job” ?

Well as we approach the films 40 year anniversary, we may have the answer thanks to insights from Sir Michael Caine [who played Charlie Croker], the film’s screenwriter Troy Kennedy Martin [who incidentally also wrote the existential anti-war movie ‘Kelly’s Heroes’] and of all places, the Royal Society of Chemistry (RSC). The solution to this intriguing existential puzzle is indicated at The Rap Sheet today.

But remember, according to Quincy Jones, this is a self preservation society and on days like these, it’s great to answer these key questions behind our existence.

Drawing © 2008 Jon Edwards from The Royal Society of Chemistry
Posted by Ali Karim at 11:52 AM