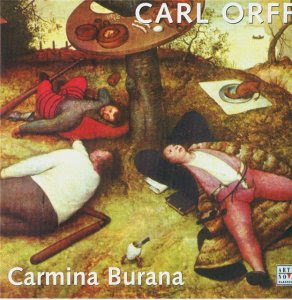 I read an interesting piece in The Times today about the life of Bavarian composer Carl Orff, the creator of Carmina Burana. This piece of music is one of my favourites despite the linkages to the Nazi Party.

“The fact that the Nazis liked Orff’s music is not in itelf proof that Orff was a Nazi, or approved of their methods,” Abraham says. “He simply lived in that generation of Germans when, unfortunately, everybody had a connection of some sort with the Nazis. Even the so-called good guys. Look at Günter Grass. Two years ago he shocked everyone by revealing that he was in the SS.” At least one gets the feeling that Orff, waking up screaming in the night, knew exactly how badly he had behaved.

The final irony in his twisted and compromised life? When he died in 1982 this most unsaintly of men ended up, as he wished, buried in a monastery – just like the scurrilous medieval poems that brought him such fame.

A decade ago I spent a lot of time in Munich, the capital of the German region of Bavaria. I worked as a senior executive for a German Industrial Multi-national and at the time it looked I was tipped for the top. The problem was I was not good at the political game, nor was I ruthless enough to fight nasty to get the role. Instead I slipped down the slippery slope and lost my job.

While spending time in Munich I went to a few Beer Kellers, and while knocking back stein after stein of Pilsner, I imaged how terrifying these places were in the late 1930’s as black shirted fascists plotted their horrors. Orff’s famous tune has often being associated Nazism, as it had its premier in 1937 at a Nazi Party Gathering. It also seems that Orff himself was a conflicted personality, and one who betrayed a friend.

I doubt whether many of those 20,000 punters, innocently enjoying this tub-thumping, thigh-slapping medley of pulsating choral numbers (based, incongruously, on a collection of poems by 13th-century monks, discovered in a monastery in Orff’s beloved Bavaria) will be aware that the piece had its premiere, in 1937, at a Nazi Party gathering. Nor that its creator had a dark secret that Palmer’s film highlights for the first time.

Orff had a friend called Kurt Huber, an academic who had helped him with librettos. Huber was also a brave man. During the war he founded the Munich unit of Die Weisse Rose (The White Rose), the German resistance movement. In February 1943 he and other Resistance members were arrested by the Gestapo, tortured and publicly hanged. Orff happened to call at Huber’s house the day after his arrest. Huber’s wife (whom Palmer tracked down for his film) begged Orff to use his influence to help her husband. But Orff’s only thought was for his own position. If his friendship with Huber came out, he told her, he would be “ruined”. Huber’s wife never saw Orff again.

Two years later, after Germany’s surrender, Orff himself was interrogated – by an American intelligence officer who had to establish whether Orff could be “denazi-fied”. That would allow Orff (among other things) to collect the massive royalties from Carmina Burana. The American asked Orff if he could think of a single thing he had done to stand up to Hitler, or to distance himself from the policies of the Third Reich? Orff had done nothing of that kind. So he made up a brazen lie. Knowing that anyone who might contradict him was likely to be dead, he told Jenkins that he had co-founded Die Weisse Rose with his friend, Kurt Huber. He was believed – or at least, not sufficiently disbelieved to have his denazification delayed.

The Times piece by Richard Morrison is a fascinating insight into the life of disturbed genius Carl Orff and his existential chant Carmina Burana– click here to read more
Posted by Ali Karim at 4:15 PM