A Forrest that will be Missed - 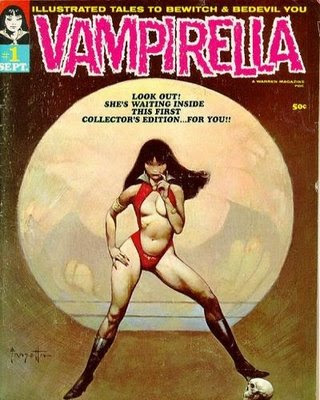 I just got word from a contact in Los Angeles that a legend in the Horror and SF world just passed away. As a young SF / Horror reader this has hit me hard, especially as I loved the work of writer Ray Bradbury, a man most associated with the Forry-Monster, [as Fangoria Magazine liked to call Forrest J. Ackerman]. He remains a legend to golden-age readers of SF, Horror, Comics and Monster Magazines. As a young teenager, Forrest Ackerman’s creation ‘Vampirella’ from Warren Publishing was required reading. I’ll miss his contribution to the genre and his impact on my young imagination.

Forrest J Ackerman, the sometime actor, literary agent, magazine editor and full-time bon vivant who discovered author Ray Bradbury and was widely credited with coining the term "sci-fi," has died. He was 92.

Ackerman died Thursday of heart failure at his Los Angeles home, said Kevin Burns, head of Prometheus Entertainment and a trustee of Ackerman's estate.
Although only marginally known to readers of mainstream literature, Ackerman was legendary in science-fiction circles as the founding editor of the pulp magazine Famous Monsters of Filmland. He was also the owner of a huge private collection of science-fiction movie and literary memorabilia that for years filled every nook and cranny of a hillside mansion overlooking Los Angeles.
"He became the Pied Piper, the spiritual leader, of everything science fiction, fantasy and horror," Burns said Friday.

Every Saturday morning that he was home, Ackerman would open up the house to anyone who wanted to view his treasures. He sold some pieces and gave others away when he moved to a smaller house in 2002, but he continued to let people visit him every Saturday for as long as his health permitted.
"My wife used to say, 'How can you let strangers into our home?' But what's the point of having a collection like this if you can't let people enjoy it?" an exuberant Ackerman told The Associated Press as he conducted a spirited tour of the mansion on his 85th birthday.

His collection once included more than 50,000 books, thousands of science-fiction magazines and such items as Bela Lugosi's cape from the 1931 film "Dracula."

His greatest achievement, however, was likely discovering Bradbury, author of the literary classics "Fahrenheit 451" and "The Martian Chronicles." Ackerman had placed a flyer in a Los Angeles bookstore for a science-fiction club he was founding and a teenage Bradbury showed up.

Later, Ackerman gave Bradbury the money to start his own science-fiction magazine, Futuria Fantasia, and paid the author's way to New York for an authors meeting that Bradbury said helped launch his career.
"I hadn't published yet, and I met a lot of these people who encouraged me and helped me get my career started, and that was all because of Forry Ackerman," the author told the AP in 2005.