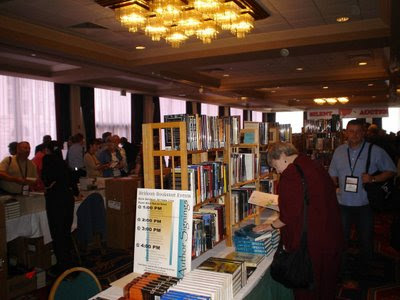 I spent as much money as I could afford on books at Bouchercon [Baltimore Book Room on Right] in October, and I'm out buying again, as we all need to do.

As much as I hate to pass on grim news, but the situation in publishing is chilly indeed, so really see if you can offer books as festive presents. Books make the best gifts as novelist Linda Richards eloquently puts it –

A book makes the perfect gift. Unlike a refrigerator, freezer, a barbecue or even something relatively small like a carpet shampooer or a ferret, books are quite painless to give.A book -- even a big one -- fits neatly into a symmetrical package. The flat sides of a book make it easy to wrap -- even an inelegant book looks elegant when it’s nicely packaged up -- and easy to stow until the time comes to give it away. All of this makes it a painless present to store, prepare and -- finally -- to give.

If you want further proof of the current state of US Publishing, then Publishers Weekly has this grim news -

Total sales for the nation's three largest bookstore chains fell 6.3% for the quarter ended November 1, with revenue falling to $1.93 billion. For the first nine months of the year, total sales were down 3.6%, and there is a strong chance that, for the first time since Barnes & Noble, Borders and Books-A-Million came to dominate the bookstore market, total sales for the three companies will fall for the full year. All three chains blamed a decline in customer traffic for the drop in sales, with sales particularly slow in September and October. Booksellers are certainly not alone in reporting declining retail sales. Last Wednesday, the Commerce Department reported that consumer spending fell by 1% in October, the biggest decline since the September 11 terrorist attacks.

You can make a difference – Books are the best presents so get your friends reading
Posted by Ali Karim at 5:07 AM